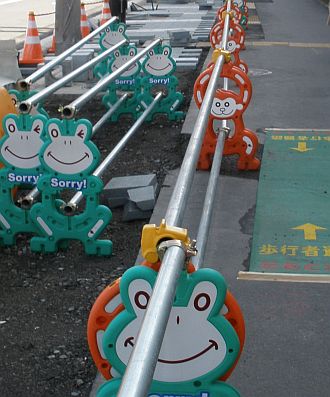 Since the 1970s, cuteness has become a prominent aspect of Japanese popular culture: entertainment, clothing, food, toys, personal appearance, behavior, iconography and mannerisms all often incorporate a form of what is called kawaisa (可愛さ, lit. 'cuteness'). Foreign observers can find this cuteness odd because the Japanese are stereotypically seen as stoic and employ it in a vast array of situations and demographics where, in other cultures, it would be considered incongruously juvenile or frivolous: public service warnings, office environments, commercial airlines, government publications -- even military advertisements.

The word "kawaii" in Japanese has a broader definition than the English word "cute". When applied to pop culture, "cute" will suffice; however "kawaii" refers primarily to the affection of a parent toward a child coupled with the protectiveness for the innocent and weak. Thus a pop cartoon character is considered "kawaii" because it exemplifies the innocence of a child and evokes general protective, caring instincts in the viewer. Other translations of "kawaii" can include "precious", "lovable", "adorable" or "innocent". Can very easily mean "Tastes Like Diabetes". It could be considered a factor on why the Christmas Cake Trope exists. Cuteness saturates Japanese culture so much that one can call this "The Cult of Cute". Just like being sexy and attractive is considered desirable for Western women, this is considered a desirable trait for a Japanese woman, among other feminine traits. Women in their twenties or even thirties might use a high-pitched voice simply because it sounds cute, despite the rest of the world finding it rather weird.

Cute elements can be found almost everywhere in Japan, from big business to corner markets and national government, ward and town offices. Many companies, large and small, use cute mascots to present their wares and services to the public.

Cute can be also used to describe a specific fashion sense of an individual, and generally includes clothing that appears to be made for young children, outside of the size, or clothing that accentuates the cuteness of the individual wearing the clothing. Ruffles and pastel colors are commonly (but not always) featured, and accessories often include toys or bags featuring anime characters. The popularity of Bishonen may be partly based on this.

Japan traditionally has had a fascination with beauty. Japan's appreciation with cuteness is a part of this trend. As a current cultural phenomenon, cuteness is increasingly accepted in Japan as a part of Japanese culture and national identity. Tomoyuki Sugiyama, author of "Cool Japan", believes that "cuteness" is rooted in Japan's harmony-loving culture, and Nobuyoshi Kurita, a sociology professor at Musashi University in Tokyo, has stated that "cute" is a "magic term" that encompasses everything that's acceptable and desirable in Japan. This is not entirely a bad thing.

On the other hand, those skeptical of this "cuteness" consider it a sign of an infantile mentality. In particular, Hiroto Murasawa, professor of beauty and culture at Osaka Shoin Women's University, asserts that cuteness is "a mentality that breeds non-assertion ... Individuals who choose to stand out get beaten down." Controversially, some have suggested that Japan's brutal defeat in World War II bred this mentality, viewing it as the only way to explain how the warrior culture of Imperial Japan did a complete 180° in just a couple of generations. The Superflat art movement was begun by Japanese artists who began using Grotesque Cute and its related tropes as a satirical comment on the culture's obsession with cuteness; their philosophy relates it to the inevitable conflict between Eastern and Western ethical and artistic traditions -- a conflict in which all of Japan has been living for well over a century.

Cute merchandise and products are especially popular in some parts of east Asia, such as China, Hong Kong, Taiwan, South Korea, and Singapore. In America, however, the opposite applies.

This phenomenon probably explains why it's hard to pin down the ages of Anime characters, particularly females, as they tend to combine young characteristics (wide eyes, overall cuteness/vulnerability) with 'older' characteristics (such as disproportionate intelligence, wisdom... or breasts). See "Generic Cuteness" for related information.

Retrieved from "https://allthetropes.org/w/index.php?title=Kawaisa&oldid=1849049"
Categories:
Cookies help us deliver our services. By using our services, you agree to our use of cookies.