Everything About Fiction You Never Wanted to Know.
Jump to navigation Jump to search
/wiki/Andy Kaufmancreator 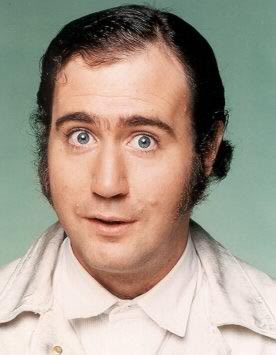 Andy Kaufman (1949-1984) was perhaps the most eccentric performer to emerge from the comedy scene of the 1970s. Born and raised in Great Neck, Long Island, Andy was something of a Man Child. As he began to stake out a career as a professional entertainer in the early 1970s, he unveiled a colorful variety of strange acts on the comedy club circuit. Some were simple routines he conceived as a child, others were... more complex; all were based on defying audience expectations. One signature routine worked as follows: When Andy appeared on stage he was already in character as "Foreign Man", stumbling through weak jokes and wretched impressions in broken English, to the audience's displeasure since they did not know this was a character. But then came the last impression, "de Elvis Presley". Revealing that his suit was a disguised Elvis outfit, the resultant serious, extremely accurate impression was enough to bring the audience to their feet. To their applause, the Foreign Man reverted back to his "normal" voice -- "Tank you veddy much." -- and the act ended. (And this was in the days before doing an Elvis impression had become a cliche. Reportedly, Elvis Presley himself thought Kaufman's was the best he had seen.)

Andy's big break into the mainstream came as a special guest on the first Saturday Night Live in 1975, where he performed a childhood routine: simply standing next to a record player playing the Mighty Mouse theme song and doing little other than standing their nervously until each appearance of the line "Here I come to save the day!", which he would grandly lip-synch. Over the years Andy made many guest appearances on SNL, usually adapting his stage material, ranging from further Foreign Man exploits to a "serious" reading of The Great Gatsby. The unifying thread of these acts was total commitment to his chosen character, no matter what reaction he got, so long as a reaction was evoked. This commitment often extended to his offstage behavior as well.

In 1978, Andy embarked upon his biggest mainstream success, the ensemble sitcom Taxi, where his Foreign Man character had been developed into the mechanic Latka Gravas. The following year he sold out Carnegie Hall for a one-night-only performance, but his work was becoming more experimental and controversial since his signature routines had lost their surprise value. In his stage act he challenged women to wrestle him, virtually always pinning them and proclaiming himself "The Inter-Gender Wrestling Champion Of The Word". He in fact played the Heel so well -- professional wrestling was one of his great lifelong passions because of Kayfabe -- that audiences believed he actually was a sexist pig (in truth, it was one heck of a way for him to break the ice with women). His alter ego Tony Clifton, a repellent Lounge Lizard who had to be treated as a separate entity from Andy, caused almost as much trouble. He arranged with the producers of Fridays, another sketch comedy show, to completely derail it the night he hosted in February 1981; the live show climaxed with him objecting to the content of a sketch and picking a fight with the crew. His attempts to break into film boiled down to one word: Heartbeeps.

Over 1981-83, he frequently was in Memphis, Tennessee furthering his wrestling career via a lengthy feud with Jerry Lawler that culminated in a brutal match where Lawler appeared to break the taunting Kaufman's neck with repeated pile drivers. The feud gained national attention in '82 when the two appeared on Late Night with David Letterman, ostensibly to make up. To the shock of many, including Dave, Jerry smacked Andy (wearing a neck brace at the time) out of his chair; Andy responded with a barrage of obscenities. This would now be called a Worked Shoot, but most viewers had little, if any, idea of the concept then. By the end of '82, Andy was so unpopular that a viewer vote banished him from SNL.

He continued to make Letterman appearances, wrestle, and so forth until he was diagnosed with a rare form of lung cancer at the end of '83 despite not smoking cigarettes. Because so much of Andy's career was based on tricking his audiences -- and he had considered faking his death, to the point where his best friend Bob Zmuda mentioned he was almost obsessed with the idea -- many people did not think he was actually dying. He continued to perform while battling the disease, shocking fans with a gaunt appearance. Despite everything from radiation therapy to healing crystals and "psychic surgery", he apparently died the following year, age 35. Having always claimed that if he faked his death he would return 20 years later, many fans eagerly awaited 2004 in hopes of The Reveal of the ultimate Kaufman prank. Sadly, he has yet to resurface, but some still insist He's Just Hiding.

Andy Kaufman's life and work, Taxi excepted, is still argued about. Haters think he was self-indulgent and perhaps insane. Lovers think he was as close as comedy will come to Dada. Though he claimed not to be a comedian(he referred to himself instead as a "song-and-dance man"), he was often friendly with those who were; in turn he is seen as an iconoclast who made comedy safer for experimentation and sometimes referred to as a "comedian's comedian". (Pee-Wee's Playhouse literally wouldn't have existed without Andy's inspiration; Paul Reubens asked his permission to do his own take on Andy's Subverted Kids Show routines.)

In 1992, the R.E.M. song and subsequent video "Man on the Moon" invoked Andy to illustrate the song's theme of the tendency of people to wonder what is and is not real (i.e. the Conspiracy Theory that the 1969 moon landing was faked). The song became the title for a 1999 biopic of Andy's career in which he was played by Jim Carrey, another admirer.

On February 24, 2010, Andy Kaufman was declared the Patron Saint of Trolls by /b/ and Encyclopedia Dramatica. However, his sainthood has yet to be confirmed by the Catholic Church.

Tank you veddy much.