Everything About Fiction You Never Wanted to Know.
Jump to navigation Jump to search
/wiki/Bret Hartcreator 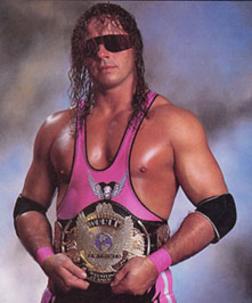 Bret Hart was one of the biggest stars of Professional Wrestling in the '90s and is simultaneously one of the most technically gifted performers to ever step into a wrestling ring and one of the most troubled and tortured personalities in the history of the industry.

Hailing from Calgary, Alberta, Canada, Bret was a member of the Hart Wrestling Family and was trained by his father Stu in the famous "Hart Dungeon". Easily the most successful member of the family he would hold the WWF World Championship several times, alongside Tag Team and Intercontinental title reigns.

Bret had a very troubled career. The most notable instance of this is the infamous Montreal Screwjob, where he was screwed out of the World Title in Canada as he was leaving for WCW and Vince McMahon feared him leaving with the belt. Bret was poorly used in WCW, never again attaining the levels of success of his WWF run and his stint would be marred by the death of his younger brother Owen Hart. His career would eventually end due to a concussion suffered in a match with Goldberg and a stroke several years later would ensure he would never wrestle again.

Bret would return to what is now the WWE in 2010, making sporadic appearances in a non-wrestling role at pay-per-views and Monday Night Raw.

As per usual, That Other Wiki has an extensive article on his career and life.

Bret Hart provides examples of the following tropes:
Retrieved from "https://allthetropes.org/w/index.php?title=Bret_Hart&oldid=1927689"
Categories:
Cookies help us deliver our services. By using our services, you agree to our use of cookies.