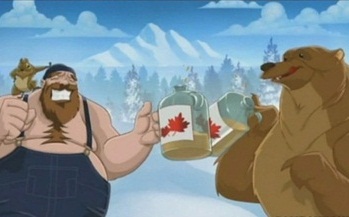 In American media, Canada is a sweet, quirky and slightly backwards version of America, eh? (Assuming it exists at all, eh?) It's as if you took everyone from Minnesota, gave them an obsession with hockey[4] (OK, more of an obsession), and made that an entire country, eh? Everybody's white (except the First Nations), eh, and everyone who isn't French has a Scottish last name, eh?

Keep in mind that Canada, Eh? has no West Coast (besides all of British Columbia), no Prairies (besides a fairly large hunk of the middle of the country), and certainly no punishingly hot weather (except for Vancouver). The hot weather stops right aboot at the border (unless it presents a passport), eh!?

Eeeeeh, Canadians eat nothing but Kraft Dinner (which is Canadian for "macaroni and cheese"), Tim Hortons, donuts, poutine,[6] and Canadianback bacon, eh? Anglophone Canadians all speak with a stereotyped West/Central Canadian English accent, putting "eh" at the end of questions or affirmations, and prominently raising the "ou" in aboot every word containing it, eh?

Our army consists of a guy with a BB gun mounted on a moose, our air force a paper airplane,[7] and our navy a guy in a canoe with a slingshot, eh?

All policemen are Mounties, and they wear their red serge dress tunics and broad-brimmed Montana Peak hats constantly while on regular duty, eh?

Canadian technology is always behind American tech, eh?[8] In fact, if it wasn't for the Americans we'd have no culture at all, eh?

Feel free to whack me over the head with a hockey stick, eh? And doon't feel soarry aboot it, eh!?

Useful Notes about non-fictional Canada now has its own page, eh?

Also see Canada Does Not Exist, eh, and Minnesota Nice for the American equivalent.