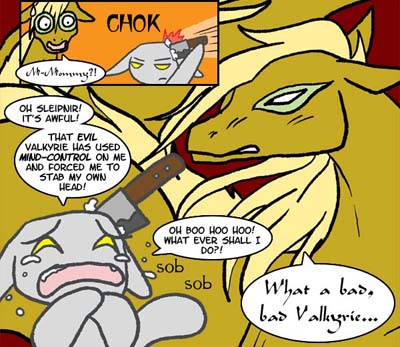 If you believe the little bunny, you must be new here. Welcome!

Alice and Callie have both been vying for Bob's affections for weeks, so when the three of them are alone, cleaning the classroom, tensions start to run high. The moment Bob's back is to the girls, Callie throws herself away from Alice, knocking over some desks on her way to the floor. "Why'd you push me!?" she spits at Alice as Bob turned to see what the commotion is. Bob rushes to help Callie up, and, when he notices she's favoring one foot, he helps her limp to the nurse's office, shooting a cold glare at Alice as they pass the doorway. It isn't until she's alone that Alice meekly says, "But I didn't do anything. . . ."

Callie just performed a Wounded Gazelle Gambit, a ploy in which the Schemer pretends to be a victim in order to garner sympathy for themselves and/or foster animosity towards the alleged aggressor. Wounded Gazelle Gambits can be as mild as implications of verbal abuse, or as extreme as framing someone else for one's suicide, at which point this trope becomes Suicide, Not Murder.

The Trope Namers is Peach Girl: At one point, the Alpha Bitch has an explanation of how this trope works which includes the line "What would you assume if you saw a wounded gazelle next to a lion?"

Almost every mystery series has at least a few episodes where the culprit turns out to be one of the victims. Also a common ploy of the Femme Fatale and The Vamp in Film Noir stories. It's one of The Oldest Tricks in The Book.

A form of Malicious Slander. Can also be a Lame Excuse. When it's done against policemen (and women) to avoid prosecution, it's a Police Brutality Gambit. See also Loser Gets the Girl. When done on a large scale, it's usually also a False-Flag Operation. Often precludes I Can Explain, which is what would usually happen in Real Life (demonstrating that Tropes Are Not Bad).

Can be a form of Poor Communication Kills on the part of the (actual) victim.

Compare Why Did You Make Me Hit You?, Arrested for Heroism, Playing the Victim Card. Related to Guilt by Association Gag, from the victim's point of view. Listed as #34 of The Thirty-Six Stratagems. If this is being done for murderous purposes, then it's I Surrender, Suckers. Compare and contrast Wounded Gazelle Warcry, where the "gazelle" is empowering rather than manipulative. See Everything Is Racist for a sociological variant.

Examples of the Wounded Gazelle Gambit in action include:

Retrieved from "https://allthetropes.org/w/index.php?title=Wounded_Gazelle_Gambit&oldid=1954393"
Categories:
Cookies help us deliver our services. By using our services, you agree to our use of cookies.