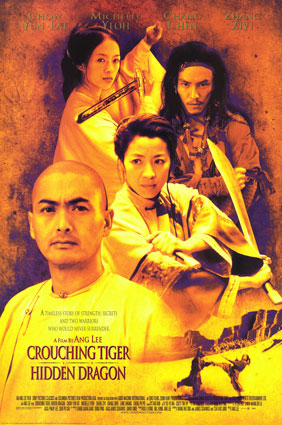 Crouching Tiger, Hidden Dragon is a martial-arts film, released in 2000, directed by Ang Lee, and starring Chow Yun Fat, Michelle Yeoh, Zhang Ziyi and Chang Chen. It is based on the novel of the same name written by Wang Dulu, which was released as part of a pentalogy. It was the first Wuxia film to gain widespread Western acclaim; it won many awards, including four Oscars, and opened the Wuxia genre to huge new audiences.

A noble and well-known Wudang fighter, Li Mubai, decides to retire in 1778 after his failure to find the murderer of his master. This murderer was his mistress, Jade Fox, who was embittered by his refusal to teach a woman the Wudang technique. Although his estranged Lady of War friend, Yu Shu-Lien, tries to talk him out of it, Li asks her to deliver his famed sword, the Green Destiny, to a friend, Sir Te, so Li can leave his warrior past behind. Knowing the sword's deadly potential, however, Sir Te asks Shu Lien to have it safely stored in capital of Beijing instead. When Yu delivers the Green Destiny to the house of a governor, she meets the governor's headstrong daughter, the Rebellious Princess Jen, and they become close owing to Jen's fascination with Shu Lien's free warrior life. Shu Lien realizes that Jen resents her Arranged Marriage, longing to become a romantic adventurer like those of fairy tales.

However, a theft of the Green Destiny at night leads Shu Lien pursuing a masked assailant, and although the thief escapes with the sword, Yu comes across valuable information when she realizes that the thief is well-versed in the arts of Wudang. Li joins the investigation, and the two realize that Jade Fox had been posing as Jen's governess for a long time to avoid the authorities, including Inspector Tsai, who has been pursuing her in revenge for the death of his wife. Jade Fox challenges and kills Tsai in a secret showdown at night, but Li arrives and soundly defeats Jade Fox, who is saved only by the appearance of the thief, revealed to be Jen. Jen had, in fact, been the apprentice of Jade Fox, learning Wudang techniques from her, but Jade Fox quickly realizes that Jen had read the Wudang scriptures that Jade Fox, illiterate, had stolen, and surpassed the master in skill. Furthermore, a desert bandit who was once Jen's lover, Lo, arrives to disrupt her wedding.

And thus begins a chase of conflicting agendas and motivations, Li who wants to avenge his master's murder and pass his skills to the proper apprentice he sees in Jen, Shu Lien who wants to steer Jen back onto the right path and end this investigation, Jade Fox who wants to kill Li (and Jen out of jealousy for surpassing her), Lo who wants to take Jen away and marry her, and Jen herself, who just wants to avoid attachment.