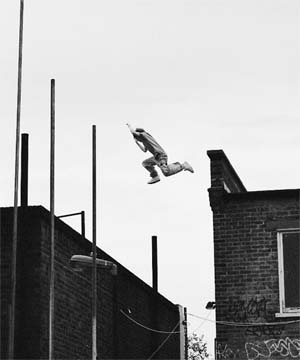 Rapid transit through an urban or suburban area by means of extraordinary leaps from housetop to housetop. Can be found in martial arts and Sentai series. Sometimes it's in live action movies.

Helps someone get across town quickly without running into obstacles on the ground and keep their destination in sight. Also a lot easier to draw than a busy street. For a reality check, the world record for running long jump is just under 30' (9m), while a typical two-lane street in America is 22' (6.5m). And that's not including sidewalks or setbacks between the street and the building's footprint, which may be required in some places. So while this trope would be easier in some countries and neighborhoods than in others, doing it in New York City would require a Charles Atlas Superpower at the very least.

A related trope common from American Superhero stories is the Building Swing. Real-life roofhopping is an element of Le Parkour. When performed on moving vehicles, it's Hood Hopping.

Examples of Roof Hopping include:

Retrieved from "https://allthetropes.org/w/index.php?title=Roof_Hopping&oldid=1841957"
Categories:
Cookies help us deliver our services. By using our services, you agree to our use of cookies.