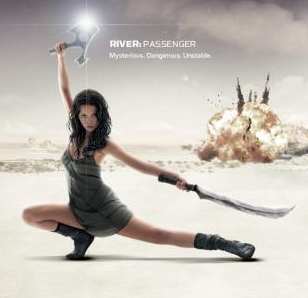 Also? She can kill you with her brain.

The tiny, hundred-pounds-when-soaking-wet Damsel in Distress is under attack. But wait! She just took down a man three times her size without breaking a sweat. Well, size isn't everything. If you know the right martial arts, then Muscles Are Meaningless.

Sometimes empowerment fuels Waif Fu, but Rule of Cool is the main source of power.

More realistic depictions of combat between a Waif Fu user and an opponent who depends on strength and size (see The Big Guy, Mighty Glacier, Boisterous Bruiser) can be quite exciting. Typically the practitioner of Waif Fu will be slapping around the attacker, doing all sorts of damage to him while he struggles to land a good hit on her. It looks like she might win. Then he finally lands a blow, and she goes flying.

It's useful for a narrative since the implication is that if she does get captured or pinned she won't be able to break free since she depends on her cool moves to win rather than simple strength. Theoretically this allows her to be made into a kidnap victim when the plot demands it without turning her into the Faux Action Girl. However, when handled badly she can end up there anyways.

A character dependent on Waif Fu is likely to be a Fragile Speedster. Sometimes Super Strength is added on, but it doesn't make a lot of sense then as to why she insists on using a combat style suited for a weaker person fighting a stronger opponent.

A subtrope of Pint-Sized Powerhouse. Often used by the Action Girl, Faux Action Girl, Hot Amazon, Little Miss Badass, and Lady of War. Very common among characters of the Mary Sue variety. Compare to the Cute Bruiser who uses a completely different style of combat and Vasquez Always Dies where the females who do look like they can wipe the floor with you never do.

Has nothing to do with MY WAIFU.

Examples of Waif Fu include:

Retrieved from "https://allthetropes.org/w/index.php?title=Waif_Fu&oldid=1842158"
Categories:
Cookies help us deliver our services. By using our services, you agree to our use of cookies.