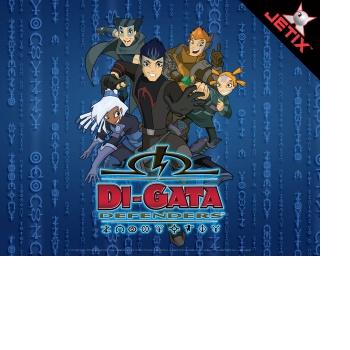 A Canadian action/adventure/fantasy animated television series created by Greg Collinson with Nelvana Entertainment, Di-Gata Defenders currently has 52 episodes and is airing the Ethos Saga (Season 2) as of Fall 2007. In North America, this show is aired on Teletoon (Sundays at 7:00 AM and 10:00 AM, and weekdays at 4:00 PM and 7:00 PM) in Canada and on Fox network's 4Kids TV block as of July 28, 2007. Internationally, the series airs on the Cartoon Network for Australia, Maori Television for New Zealand, the series also airs on the Astro Ceria for Malaysia, Hero TV for the Philippines starting November 3, 2006 and Jetix for the UK starting August 25, 2007 and Kix! for the UK starting September 29, 2008.

The series follows the travels and adventures of six teenage children, part of an organization called the Di-Gata Defenders. Their mission as heroes is to defend the planet Ra Dos against evil factions. Seth, Melosa, Erik, Kara, Rion and a Sixth Ranger must defeat the evil Lord Nazmul and his Order of Infinis before they take over Ra Dos. The team meet many friends and allies along the way but also encounter enemies. Knowing just who is friend or foe is vital if the Defenders are to succeed in their mission.

The series was originally broadcast from August, 2006 to September, 2008. A total of 52 episodes in two seasons.

Tropes used in Di-Gata Defenders include:
Retrieved from "https://allthetropes.org/w/index.php?title=Di-Gata_Defenders&oldid=1749053"
Categories: