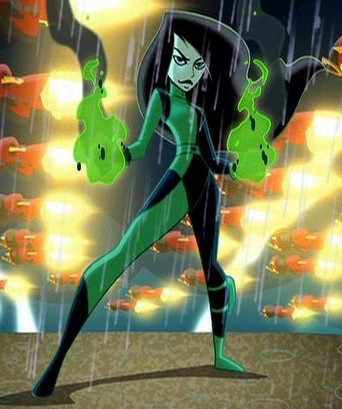 I broke a nail...in your ribcage.

Those stupid boys and their ridiculous little games. What's a girl to do? Well, if you're this girl, most likely kick their asses.

The villainous version of the Action Girl. Likes dressing in black and keeping her nails particularly long and sharp. A popular combination with The Baroness, but usually not The Vamp or the Femme Fatale, since she prefers to pummel The Hero to a bloody pulp instead of seducing him, but there are certainly exceptions, and these exceptions can be incredibly dangerous.

She's usually someone's Evil Counterpart. She tends to enjoy beating up tougher-looking characters, and a man's refusal to fight back tends to annoy her, and the chivalrous guy can end up badly battered.

You'd think that this would be the point where the Action Girl and the Dark Magical Girl intersect. Go on, keep thinking that way. We'll see how long you live. Hang on, let me get my stopwatch.

If The Messiah offers her friendship, expect her to take it as an insult. The Dark Action Girl is generally immune, or at least resistant, to The Power of Friendship. The Power of Love can soften her up sometimes, but it's a crapshoot; the foolish boy could just as easily wind up getting used and discarded, rejected violently, or just plain killed for his trouble. Deliver Us From Evil sometimes happens, but even then, the resulting Action Mom is almost always more of a Noble Demon with the child serving as a Morality Pet. Though, more often than not, especially if her little one is the fruit of an Unholy Matrimony, you just get an Evil Matriarch. Of course, if the child starts picking up some of her mom's habits, she might become a Little Miss Badass.

For some reason, while heroic Action Girls can fail to live up to their reputation, you will almost never find a Faux Action Girl Dark Action Girl. This is probably because no matter what standards the decade or culture sets for women, villains can break those standards anyway.

For many guys (and certain girls), a major source of Fetish Fuel.

If there's no Action Girls on the good side, all of the heroic females being damsels in distress, the work is likely using the Madonna-Whore Complex trope.

Examples of Dark Action Girl include:

Retrieved from "https://allthetropes.org/w/index.php?title=Dark_Action_Girl&oldid=1920393"
Categories:
Cookies help us deliver our services. By using our services, you agree to our use of cookies.