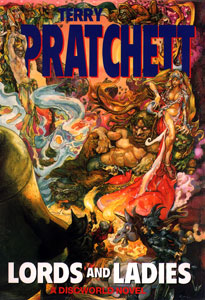 Lords and Ladies is the 14th Discworld novel and the third or fourth in the 'witches' theme. According to Terry Pratchett, this was the moment where the character of Granny Weatherwax finally reached her full supremacy.

Following on directly from Witches Abroad, the book concerns the invasion of The Fair Folk into the Discworld via rifts opened from their home 'parasite universe', which manifest as crop circles. The malevolent elves see in magnetism and are thus vulnerable to iron, especially magnetic Thunderbolt Iron, and the main portal between their country and Lancre is shielded by a ring of magnetic standing stones, the Dancers. However, they use mind control on a group of young impressionable witches and a group of theatrical players. This results in the Dancers being removed and a full-scale invasion commencing, coinciding with King Verence's wedding to Magrat. It's up to the three witches of Lancre to defeat the malevolent elves and save the day.

Tropes used in Lords and Ladies include:
Retrieved from "https://allthetropes.org/w/index.php?title=Discworld/Lords_and_Ladies&oldid=1796244"
Categories: