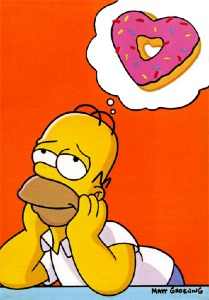 "Is that... food? Everyone smuggled food down here!? Unbelievable! You guys put our lives in danger because you couldn't go without a snack for a day!? You are all... awful! [stomach growls] So hungry... is that... egg custard in that tart?"
—Aang, Avatar: The Last Airbender, "The Great Divide"

Hunger is a very powerful force. A starving person may degrade themselves for a scrap of food; a hedonist will do so for a teaspoon of cous cous. Mmm... delicious cous cous. Even a person with a full stomach may have a hard time resisting a marvelously mouthwatering meal or morsel.

Much like characters with Attention Deficit Ooh Shiny, these characters are distracted by something delicious, like a freshly baked, moist, sweet delectable apple pie cooling on a window sill... *drools* *cough*

This can be used as a "soft" Achilles' Heel against gluttonous characters (or anyone, provided the bait dessert is good enough) that can do anything from distract, bribe, or completely sidetrack a given character for up to an hour (or more, if the tempter is a cook with a fully stocked kitchen). In cartoons, this may be enough to stop a predator/enemy in their tracks, in other media, the sleeping dust/amnesia powder sprinkled over the glazing does the trick.

May happen just by looking at it, smelling it, and in powerful instances from mere memory or having it be described... like that time I had this delicious just-baked and still warm pineapple empanada, with a gold crust that was still crisp yet unburnt, and the filling with small chunks of pineapple still discernible when you chewed, *drool*

Examples of Delicious Distraction include:

Homer: Faster, son! He's got a taste for meat now!

Homer: I know! [Pulls out string of sausages] These wieners will give me the quick energy I need to escape! [Homer eats them and suddenly speeds up, leaving the dogs in the dust]