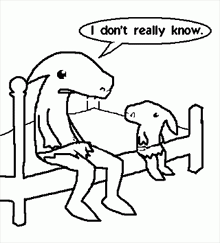 It's a wonder there are so many cutebolds.

A conversation, usually between parent and child, about sex. May be occasioned by the question, "Where do babies come from?"

Most often found in teen dramas but also Played for Laughs in comedies.

Sometimes comic effect is added by the parent using toys (e.g. a G.I. Joe and a Barbie doll) as visual aids.

Compare This and That.

Examples of The Talk include:

Retrieved from "https://allthetropes.org/w/index.php?title=The_Talk&oldid=1924219"
Categories:
Cookies help us deliver our services. By using our services, you agree to our use of cookies.