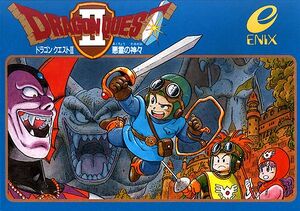 After the events of Dragon Quest I, the descendant of Erdrick married Princess Laura and sailed away from Alefgard. They founded the kingdom of Torland where the couple and their children happily lived out their days. Generations later, chaos broke out with rumors of a powerful evil being emerging from the southern impassible cliffs of the frozen plateau, Rhone. His name was Hargon, an Evil Sorcerer bent on world destruction. He chose Moonbrooke Castle to launch his reign of terror.

Hargon's army swept in and decimated the castle, its inhabitants, and the King within minutes. A lone, injured guard escaped and walked to the nearby fortress of Midenhall Castle. No sooner had he told the king of Moonbrooke's defeat that he perished. Now as a descendant of Erdrick, The Prince Of Midenhall must venture out to meet his two cousins and stop the evil hand of Hargon. With a world four times larger and many new monsters, the heroes have a much harder and dangerous adventure than their ancestor.