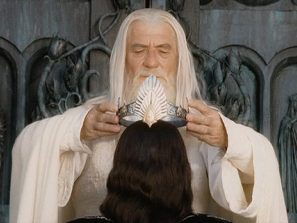 "Now come the days of the king! May they be blessed."

This is when, (not always) at the end of the story, the main character or characters are crowned the leader of the land they just saved. Reasons can vary:

Sometimes, it doubles as a coronation wedding with a prince / Princess or the hero's Love Interest, guaranteeing a Happily Ever After of Happily Married conjugal bliss.

Examples of Awesome Moment of Crowning include:

Mojo Jojo: Now as I was saying before I was so rudely interrupted, I, Mojo Jojo, have succeeded in my first, greatest, and most brilliant plan ever. And I, Mojo Jojo, SHALL BE KING!!!

"Gene Co will live on, under new management... me."

Men said the gods were satisfied because the evil king and his spawn were slain, and when his young brother Tarascus was crowned in the great coronation hall, the populace cheered until the towers rocked, acclaiming the monarch on whom the gods smiled.

Kerrigan: You see, at this point... I'm pretty much the Queen Bitch of the Universe.