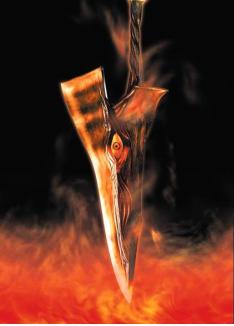 Some weapons are people, complete with names and minds. And some people are evil. This is about them.

Obviously, weapons are made to hurt and kill. These weapons enjoy it too. And some will try to talk the wielder into it, with strange voices of all kinds. Some are heard with the ears, some sound in the mind.

These weapons might kill everything in their way, rather than just what they need to. Some refuse to go back into the scabbard without killing. Some just don't activate the awesome magic without the wielder killing a kitten. Some kill not the body, but the soul. Some kill their wielders as well, whether directly or indirectly, instantly if they're hungry enough or over time by draining Life Energy. Some don't. Because, you see, they wield the wielder, instead of the other way around. And they are prone to being hard to get rid of.

How did they come to be like that? Some were deliberately enchanted, or rather cursed. Some are imbued with the evil of their maker, some indeed, are the Soul Jar of an evil human, if not something even worse. With some, it's the material they were made of, and some were corrupted by deeds done with them, even worse than the usual cruelty of the battlefield. Some may be Forged by the Gods - but not by any of the nice ones. If It Was a Gift—do not trust the giver thereafter.

The "personality" of the evil weapon often varies according to the traits associated with it. A dagger is insidious, an axe encourages brutality, staffs are subtle and sophisticated in their corruption... Swords are the most common evil weapon. Most other weapons have a peaceful purpose: bows and spears for hunting, hammers for hitting nails, axes for chopping wood... The sword and mace are the only medieval weapons that cannot serve any purpose except war. Because they are so common they also vary much more in how they are evil.

Examples of Evil Weapon include:

Retrieved from "https://allthetropes.org/w/index.php?title=Evil_Weapon&oldid=1938747"
Categories:
Cookies help us deliver our services. By using our services, you agree to our use of cookies.