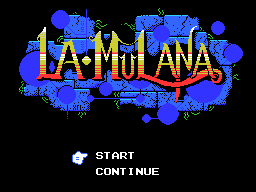 Finally I got to La-Mulana. The adventure starts here!

La-Mulana (ラ·ムラーナ) is a Metroidvania platformer videogame for Windows. It is freeware, and was developed by three people who call their development group Nigoro (formerly known as GR3 Project) in Japan as a tribute to the MSX computer system/gaming console (and includes tons of references to such). You play an Indiana Jones-esque archaeologist who must solve the numerous puzzles throughout an immense set of ancient ruins.

La-Mulana is an homage to the 8-bit action-adventures that you might remember from your childhood. It wants to instill in you the same sense of fear and awe you felt back then. The sense that everything is at stake and anything could happen.

But you've grown up, haven't you? Your twitch skills are stronger, and your knowledge of Video Game Tropes is broader. Can you ever really go back?

No need to worry 'bout that. La-Mulana has grown up too.

You can download the game and the English patch here.

A remake on Wii Ware was released in Japan on June 21, 2011, with 32-bit sprite graphics in place of the MSX-style ones, among various other changes; it was developed by the same three guys who did the original. An overseas release localized by Nicalis was planned, but was ultimately cancelled due to development problems and the decline of the WiiWare service. However! According to this post on NIGORO's blog, the remake is still coming to PC. And this version will have an overseas release. Watch the trailer here.

Tropes used in La-Mulana include:
Retrieved from "https://allthetropes.org/w/index.php?title=La-Mulana&oldid=1902402"
Categories:
Cookies help us deliver our services. By using our services, you agree to our use of cookies.