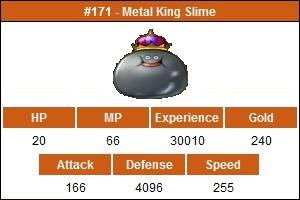 Hard to find, harder to kill, but so worth it.

A normal video game Mook is a monster that shows up regularly in large numbers, exhibits Suicidal Overconfidence, goes down in a sword strike or four, gives a little experience, and drops items that are either Vendor Trash or subject to the Antidote Effect. A Metal Slime is everything but normal: an uncommon monster with an uncommon reward that's uncommonly difficult to obtain from the monster before the battle ends.

To be a Metal Slime, an enemy must satisfy all three of the following criteria.

Most of the time, the enemy will give the reward for its defeat, making the challenge to kill it before it escapes. A variation is an enemy that is lucrative to steal from—in this case, the issue could be that the enemy gets itself killed before you have a chance to relieve it of its Infinity-1 Sword or Rare Candy.

Assuming it's not of the "strip it bare before it dies" variant, there are many ways a Metal Slime can be difficult to kill. If the enemy has a very high chance of escaping, it may be a feat to take action against it at all. It could also have high defenses, such as a 98% chance to dodge attacks, or defense power so high it reduces all your attacks to Scratch Damage. Alternately, some enemies can disable your party's attacks outright, leaving the player with no way to take effective actions against it. Depending on the combat system used, there may be methods of survival that are even more unusual, of course.

A Metal Slime is a specific variant of the Goddamned Bats—it is more annoying than deadly.[1] Though most Metal Slimes lack significant offensive output, enemies are only excluded from this trope due to power level if they pose a significant threat to a party at the appropriate level for the zone.

Given the nature of the Metal Slime, it can be a major target for players working on an Elite Tweak or 100% Completion. If an item/cash-type Metal Slime ends up having an esoteric weakness that gives the player a decent chance of killing it (or if the rewards are just that good[2]), it can also become a Pinata Enemy.

This trope is named after the Metal Slime from the Dragon Quest series. Despite being most common in RPGs, a Metal Slime can appear in games of other genres. Not to be confused with a Metal Slug, although finding those is a fun reward in and of itself.

Examples of Metal Slime include:

Retrieved from "https://allthetropes.org/w/index.php?title=Metal_Slime&oldid=1835202"
Categories:
Cookies help us deliver our services. By using our services, you agree to our use of cookies.