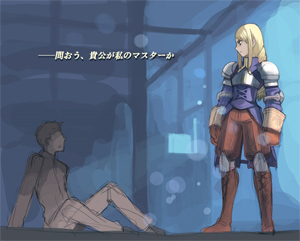 When the Fifth Grail War of Fuyuki City goes horribly wrong, the entire city is consumed by Angra Mainyu. Still adamant on their plans to regain the Third Magic, the Einzbern family decides to find a new place to set up operations.

Seventeen years of searching later, they decide to go with the City of Lucca: the best spiritual land in Italy, managed by a family of Manipulative Bastard Chessmaster mafia don magi known as the Mezzanotte. After some serious politicking, and the Church's reluctant agreement, the Einzberns finally get to use the land for the next war in six years' time, and the trouble starts all over again.

The RP spent eight months in Development Hell, but finally managed to get out of that once Rin took charge of the issues and cleared them up. Activity is relatively slow, but that's because it's just starting. There are allowances for Nasuverse canon characters, and canon Servants in particular aren't a problem, but for the most part, Original Characters are preferred.

Incidentally, during those eight months, the chat-box has developed into its own parallel universe with a relatively well-documented (if random) plotline. That story is primarily set in the "Tiger Dojo, Lucca Branch".

It should be noted that Fate Nuovo Guerra's community revolves around its Chatbox, here (expired in 2015). Any questions and most discussions are had there.

The site can be found here.

The Community Chatbox has these tropes:

Lastly, the Chatbox RP has these:

Retrieved from "https://allthetropes.org/w/index.php?title=Fate_Nuovo_Guerra&oldid=1737735"
Categories:
Cookies help us deliver our services. By using our services, you agree to our use of cookies.