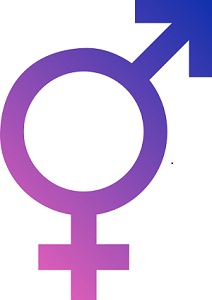 For most fictional purposes a hermaphrodite is an individual that's both male and female; specifically, one that has both male and female genitals. Biologists don't use the word that way, but we are talking about storytelling here, not biology. In real life, however, applying the term to a human is not only inaccurate, but likely offensive and stigmatizing (specifically by reducing people to nothing more than sexual outliers). While sexually ambiguous humans do exist, a true human hermaphrodite has yet to be found, so the term you're probably looking for is "intersex".

Retrieved from "https://allthetropes.org/w/index.php?title=Hermaphrodite&oldid=1884093"
Categories:
Cookies help us deliver our services. By using our services, you agree to our use of cookies.