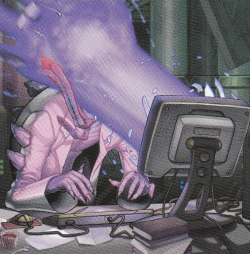 So that's where the MythBusters put that monitor.

Not to be confused with Ramping Slo-mo in explosive action scenes.

Sometimes "normal" Overdrive is not enough. Almost any piece of Applied Phlebotinum can be made to work a little harder, at the cost of an increased risk (or certainty) that it will eventually explode. A Necessary Drawback to show why it shouldn't be used this way very often.

The idea probably comes from the notion of red-lining a car engine, which will give you extra speed, but puts so much strain on the engine and produces so much heat that its weaker parts are liable to break (or in the literal overclocking of computer processors, see real life examples below). But in Science Fiction, this ability is available to just about everything, without making massive time-consuming modifications to the equipment. (Go ahead, try to make your tablesaw run faster.)

Your chief engineer will Techno Babble some stuff about "bypassing the safety protocols", but this will not require laying new cables or replacing clock chips—it just requires a few pokes at the control console. This is often achieved by applying more power.

It's even possible to do it by accident: give a computer a sufficiently hard math problem, and it will grind out an answer just before it overheats and expires from the effort. Also, being overclocked causes a system to work at increased efficiency and then stop dead—in real life, an overclocked computer will run faster, but has an increased chance of making (typically small) mathematical errors.

In general, overclocked phlebotinum will last exactly long enough to solve your problem, exploding right after you've shot the big gun. Alternatively, it may solve or delay your immediate problem, then break down, leaving you stranded in space with a seized engine.

Overclocking an Energy Weapon (sometimes called "hotshotting") is a good way to create the equivalent of a One Bullet Left scenario: "I can boost the power of your weapon, but it'll only last long enough to give you one shot."

One popular use of Explosive Overclocking is as a subversion of Tim Taylor Technology.

It may also cause Explosive Instrumentation, although enemy attack or Percussive Maintenance will usually do the same thing. Especially if your vessel is not properly grounded.

Compare with Overclocking Attack, where you do this because you want something to explode. This can happen when you use the Forbidden Chekhov's Gun. See also Flawed Prototype, which usually can be overclocked to match a "perfect" model, and Cast from Hit Points, where instead of a chance of complete self-destruction there is a guarantee of partial self-destruction.

Note that hobbyists have been overclocking computers for years, but an overclocking that causes a computer to work much faster for five minutes and then explode is generally considered to be a failure. Extreme overclocking can be actually explosive, enough to force their users to keep their CPUs cold with liquid nitrogen! Most of the time, though, the computer will simply shut down, due to hardwired safety measures that are not sensible to circumvent.

It should be pointed out that in settings where the designated Good Guys' hardware is barely adequate to some of the tasks it is called on to perform, such hardware might be explicitly designed to include an 'emergency overload' function. The idea is to get improved (and therefore adequate) performance out of it for a few critical moments. If you can't build a spaceship fast enough to escape the Negative Space Wedgie, maybe you can build one fast enough to get ahead of it for a few minutes using Explosive Overclocking like a jet engine's afterburner. Better than nothing, right?

It's usually safer to Reverse Polarities, but that wouldn't result in a pretty fireball from your automatic Self-Destruct Mechanism, would it? See also No Plans, No Prototype, No Backup.

This particular form of the trope will often be expressed in terms of disabling the safety features or "exceeding design specifications", which, again, has some basis in the way certain devices work, but acts from the assumption that, as a general rule, the way you build a high-assurance system is to take a low-assurance system, and add a sizeable safety margin.

Applied to The Hero himself, Heroic RROD may be an organic counterpart to this trope (usually due to excessive use of a Dangerous Forbidden Technique or Super Mode).

Examples of Explosive Overclocking include:

Retrieved from "https://allthetropes.org/w/index.php?title=Explosive_Overclocking&oldid=1798210"
Categories:
Cookies help us deliver our services. By using our services, you agree to our use of cookies.