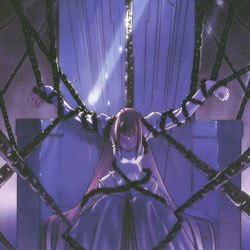 Shiki Tohno was involved in a major accident in his childhood. Miraculously, he survived, albeit with a weakened body and no memory of the incident or much of the rest of his past. However, when he awoke in the hospital, crooked lines covered everything, from his own body to his bed to the other doctors. He quickly discovered that anything could be destroyed with ease, simply by cutting along those lines. It seemed like the world was in danger of crumbling around him... He would have gone insane had he not come across a mysterious self-styled sorceress, who gave him glasses that hid the "lines of death" and allowed him to live a normal life. Following the incident, Shiki was sent away from the main household to live with a branch family, while his sister was raised as the new heir.

Now a high school student, Shiki suddenly receives word from the Tohno estate. The family head, his father, has died, and he is to return at once to the main household. Meanwhile, strange murders have begun to occur in the city, the victims drained of their blood. Shiki doesn't pay so much interest to those news, until one day he feels compelled to follow a strange woman, and dismember her in her appartment... only for said woman to reappear in front of him the following day, not that much worse for the wear, demanding his help on stopping the blood draining monster that has been decimating the town.

Originally a Visual Novel, with a fan-translation patch available from Mirror Moon. There is also a manga adaptation (released in English as "Lunar Legend Tsukihime"), an anime adaptation (Shingetsutan Tsukihime), a pseudo-sequel game of short stories (Kagetsu Tohya), and a series of fighting games (Melty Blood) that takes some liberties with the paths from the original game.

A remake was announced in April 2008, reportedly finally containing the Satsuki Yumizuka/Sacchin route, one of the running jokes of the franchise. The ending to the manga (and the DVD Commentary to the second episode of Carnival Phantasm) also added official secondary confirmation that the remake was in the works. After twelve years in the Development Hell with only occasional reveals of redesigns and the odd new character, the remake was finally announced for a Summer 2021 release on the Playstation 4 and the Nintendo Switch, under the name Tsukihime: A Piece of Blue Glass Moon .

Takes place in the Nasuverse.

Tropes used in Tsukihime include:

Aside from that rather well-known scene, first-person descriptions of characters committing murder tend to include mention of getting sexually excited and even ejaculating upon doing the deed. On the other side of the coin, Shiki is rather notorious among the fandom for not being the most gentle lover.

Hisui also has some elements of this with Shiki due to the fact that she often helps Shiki more than is strictly necessary, and has a crush on him that's more or less obvious depending on the route.

Retrieved from "https://allthetropes.org/w/index.php?title=Tsukihime&oldid=1864864"
Categories:
Cookies help us deliver our services. By using our services, you agree to our use of cookies.