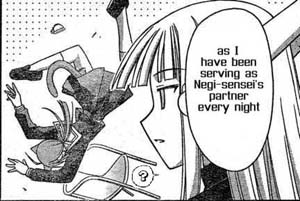 When shocked or surprised, often by an absurdity or non sequitur, the listener may fall over onto his face, his limbs in a twisted mass above him. In its typical form, the character in question has just heard someone else say something so incredibly stupid that it, quite literally, floors them. A device usually limited to humorous anime, this may have been imported from a similar trope in early American comic strips called the "flip-take". A variation used mainly in films (as falling on one's own face in real life tends to be dangerous) has the characters briefly faint backwards, as opposed to forwards.

Usually, no one is harmed by taking a flying dive face-first into the ground. A less expressive equivalent would be Face Palm; a more expressive one would be a Head Desk.

Only a handful of comedians can successfully pull off a full-fledged Face Fault in live action performance; notable examples include Jim Carrey, Steve Martin, Dick Van Dyke, and Chevy Chase. Live action performers are more likely to do The Pratfall instead, which is a similar comedic trick but leaves the character on his rump.

Related to but not to be confused with the Face Plant, which is not a reaction to absurdity.

Examples of Face Fault include:

Retrieved from "https://allthetropes.org/w/index.php?title=Face_Fault&oldid=1880699"
Categories:
Cookies help us deliver our services. By using our services, you agree to our use of cookies.