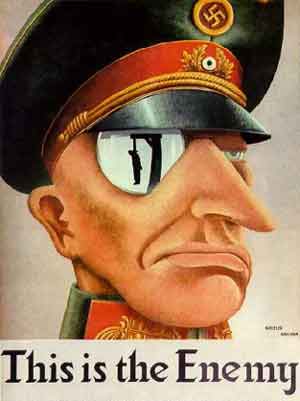 During my wartime years in the United States, I heard not a single "morale-building" story about Central Europe that did not involve a "Nazi nobleman."

Ah, yes, the Nazi Nobleman. This arrogant aristocrat has wholeheartedly and enthusiastically embraced the Nazi ideology of "might makes right" and "the strong should dominate the weak". No doubt this is a result of his superior breeding and privileged upbringing, during which he was raised to believe himself superior to all those lowly proles.

Naturally, of course, this enthusiastic Nazi hates democracy, probably because it threatens the superiority of the noble class, and is almost certainly wealthy, and trusts the Nazis to help him keep his wealth. He is probably a good pal of old Adolf himself. In some stories, he is a leading scientist, or perhaps a sadistic jailer, but more often, he is a Cultured Warrior, or some variant thereof. His uniform will be immaculate, starched and pressed, his last name begins with "Von", and of course a monocle is mandatory.

The reality of this trope is far more complicated than the trope itself, and can be found on the Analysis page.

Note that this does not apply to noblemen who happen to be in the ranks of the German army during WWII, or German aristocrats who express un-PC opinions about some ethnic group; this trope refers to noblemen who enthusiastically endorse and specifically promote the Nazi Party and its ideology.

Examples of Nazi Nobleman include: