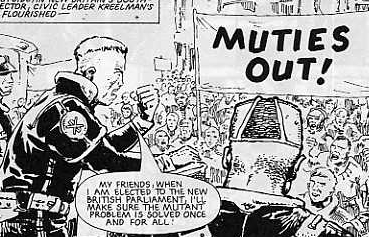 Remind you of anything?

From 1933 to 1945, Germany was ruled with an iron fist by Adolf Hitler and the Nazis. They eventually used Refuge in Audacity to kill millions of people they found undesirable with about half (using the 12 million death figure) being Jews, the rest being various other groups that often got picked on in Europe: communists, Gypsies, homosexuals, Jehovah's Witnesses, the mentally ill, disabled people, Slavs, etc. The Nazis also officially started the most destructive war in human history, which killed even more people (roughly 50 million). The result is that they are considered by many the most evil group of people that ever lived, and therefore easy and acceptable to make look bad.

For that reason ever since then people have symbolized villains with the Nazis. These pseudo-Nazis can generally range from sympathetic people who got swept up in the chaos to a simplified bunch of Psychos for Hire who joined the army simply so they can massacre inferior races. While the former is better depthwise, making these Nazis By Any Other Name too sympathetic can result in a Draco in Leather Pants.

Common elements include the look of a paramilitary political force centering on one person as the supreme leader heavily guarded by his black shirted longcoat-wearing minions, and their ideology typically boils down with the leader often shouting, "We are the MasterRace/Species! We will reign supreme! We will crush all who oppose us! All inferiors shall submit or/and die! Hail Victory!" To that end, the most hideous of crimes are obvious options they will use in a heartbeat and the only thing that will get them to stop is unyielding force.

Of course, since the Nazis themselves stole symbolism, slogans and rituals from other historical sources (and racism looooong predates their existence) much of what is associated with them today is actually far Older Than They Think. So a few examples commonly given merely reflect generic totalitarian, Cult of Personality, and/or dictatorship elements. Additionally, Anime will also borrow from Imperial Japan for example the killing of surrendering soldiers, or attempts to stamp out culture.

Any strong German ruler (Frederick the Great, Bismarck, Barbarossa...), German military force (every single one), or right-wing German political movement (likewise) will very likely get this treatment in most modern portrayals.

A subtrope of Fictional Political Party.

Compare with Scary Dogmatic Aliens. Similar to Space Jews. Visit the scenic Reichstropen for more about Those Wacky Nazis and their imitators. For empire builders who consider themselves inherently superior to all other races/nations but don't neccessarily partake of other Nazi ideology or imagery, see Master Race.

No real life examples, please; the only Nazis in real life are Nazis, which effectively excludes every other group. Even Neo-Nazis.

Examples of A Nazi by Any Other Name include:

Retrieved from "https://allthetropes.org/w/index.php?title=A_Nazi_by_Any_Other_Name&oldid=1958594"
Categories:
Cookies help us deliver our services. By using our services, you agree to our use of cookies.