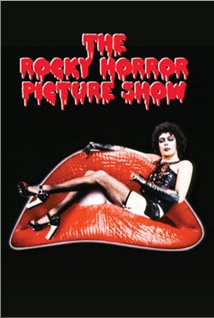 Those nylons never had it so good.

The Rocky Horror Picture Show is a 1975 musical film by Richard O'Brien. It's most famous for still being played in theaters all over the world once a week, and for having a fanbase that dresses up, throws stuff at the screen, re-enacts the scenes and generally indulges in Audience Participation. The film is based on The Musical/Stageshow The Rocky Horror Show, also by Richard O'Brien (who played Riff Raff both in its original staging and this film).

The story: Brad [6] and Janet [7] are two lovely, naive virgins from Denton, Texas, who get engaged and drive off to tell Dr. Scott[8], their former teacher. However, on the way there, they get a flat tire and find themselves outside a spooky castle house ("It's probably a hunting lodge for rich weirdos" [9])... and that's where things get really, really, reeaaaaaaaaalllly weird.

They meet the servants Riff-Raff and Magenta, and groupie Columbia, who live with Dr. Frank N. Furter... a "Sweet" Transvestite Mad Scientist, to be specific (from Transsexual, Transylvania). After being stripped down to their underwear, they are invited up to Frank N. Furter's lab where he unveils his creation: the Brainless Beauty Rocky Horror.

At this point, Dr. Scott appears looking for his nephew Eddie, and Janet and Rocky are found together. Frank N. Furter invites them all to dinner...

There is a (spiritual) sequel Shock Treatment (1981) focusing on the bizarre turns Brad and Janet's lives take upon their return to Denton after their adventure in Rocky Horror, but it was not as popularly received as its predecessor and is thus both obscure and hard to find. The fact that the makers weren't happy with how it turned out, due to many compromises made during its production, such as character re-castings and a drastically cut budget, doesn't help (it's also harder to stage as an Audience Participation show due to a bigger cast of characters). Although it was just recently[when?] released on DVD.

The Rocky Horror Picture Show was added to the National Film Registry in 2005.

In 2008, a remake was planned by MTV. Richard O'Brien was not involved and not happy, and perhaps fortunately for everyone involved the project was cancelled. In 2016 though, spurred by the success of their broadcast of a live production of Grease, FOX greenlit a new remake, which was eventually broadcast on on 18 October 2016. As a nod to the original, the cast included Tim Curry as the Criminologist.

Tropes used in The Rocky Horror Picture Show include:
Retrieved from "https://allthetropes.org/w/index.php?title=The_Rocky_Horror_Picture_Show&oldid=1956930"
Categories:
Cookies help us deliver our services. By using our services, you agree to our use of cookies.