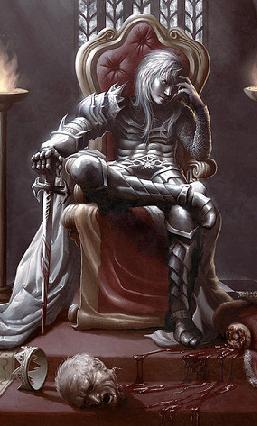 Time To Be King

Aristocrats Are Evil with ambition!

The Evil Prince is in the line for the throne; he's sure he'd make a great king if the guy(s) ahead of him in the succession would only drop dead. It is the job of the Evil Prince to hurry those obstacles along. By any means necessary.

Usually the Evil Prince is second (or worse) in line for the throne, so is not going to inherit normally. A few real bastards are the eldest sons, however, and will give their fathers a push just to make sure they don't have to wait until the old king drops dead of old age and terminal gout.

A very common subtrope is to have the Evil Prince as brother to the king, who tends to be his polar opposite and utterly oblivious to his brother's true nature. This is usually pretty bad news for the children of the king, as Evil Princes traditionally make rather poor uncles.

For some reason there seems to be very few Evil Princesses, perhaps because of the very strong influence of FairyTale (and Disney) heroines. Or more prosaically, because some princesses are simply not in line to inherit the throne, no matter who may meet with an unfortunate accident. The rare princess who does ascend to the throne in this way will invariably fall into God Save Us From the Queen

The main basis of this belief is that because a ruler is illegitimate, they are automatically evil and that the only "good ruler" is a legitimate one. People tend to forget that a legitimate prince is more likely to be spoiled and grow up uncaring for the plight of others or grow up believing themselves to be one step away from God. The fact that a certain psychopathic Roman emperor was LEGITIMATELY given the throne really undercuts the idea that legitimate monarchs really are "better". Or perhaps the main point of the assumption is simply the belief that almost any law is better than Asskicking Equals Authority. Or that someone who cheerfully disposes of their brothers and/or father is unlikely to rule with kindness.

This is at least Older Than Print, stretching back to Mordred and seen as recently as Stardust.

Contrast with The White Prince, The Wise Prince and Knight in Shining Armor.

In terms of the ranks of Authority Tropes, the tropes that are equal are Prince Charming, Prince Charmless, Warrior Prince, The White Prince, The Wise Prince, and all Princess Tropes. The next steps down are The Good Chancellor, Evil Chancellor, Standard Royal Court and Deadly Decadent Court. The next steps up are The Caligula, The Good King, God Save Us From the Queen, The High Queen, She Is the King, and The Woman Wearing the Queenly Mask.

Examples of The Evil Prince include:

Retrieved from "https://allthetropes.org/w/index.php?title=The_Evil_Prince&oldid=1888776"
Categories:
Cookies help us deliver our services. By using our services, you agree to our use of cookies.