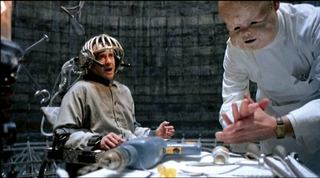 So, you're the Evil Overlord in charge of The Evil Army. You've got an insanely clever Evil Plan, an Evil Genius to hatch it and The Dragon to carry it out, Mooks, a Quirky Miniboss Squad to command them, and silly outfits for them to wear (including plenty of Fan Service in the female uniforms). You have plenty of Applied Phlebotinum. You've got a Psycho for Hire for dealing with nasty stuff in the field. You may even have an Amoral Attorney to deal with any litigation-waving heroes. If you've got all that, you're missing only one thing: A guy who makes a "science" or "art" out of tearing body parts loose and inflicting serious pain. Enter the Torture Technician.

The Torture Technician does just what his name implies. Based in his own Torture Cellar, he takes the heroes and turns them into screaming, skinned shambles. He makes for prime Nightmare Fuel, as he's often sadistic to the point of overblowing it. Note that many Torture Technicians apparently believe we're still in the Middle Ages as far as interrogation techniques go. That is, if they're not down with electricity. Though a fair number favor "upgrading" their arsenal with the use of a Robotic Torture Device.

The Torture Technician typically isn't very physically strong, however. There's no real reason for him to be; all his enemies are restrained. When they do get free, however, the Torture Technician is usually taken out fairly easily, or better yet, fed to his own machines.

If he's a fat, giggling, whip-toting, gay Nazi, he's probably one of these. Compare the Exalted Torturer which is basically the "heroic" version of this.

Examples of Torture Technician include: