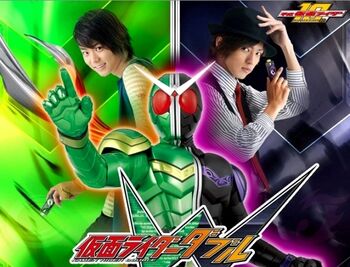 "We are two detectives in one."

The second Kamen Rider series of 2009 and the eleventh entry of the franchise's Heisei Era.

Shotaro Hidari is a Private Detective who imagines his life as something straight out of a Hardboiled Detective novel. His partner is a boy called Philip, a mysterious researcher able to psychically connect to a collection of all the world's knowledge.

Together with their landlord and self-proclaimed "chief" Akiko Narumi, they operate the Narumi Detective Agency in the "Windy City", Futo. Their specialty is solving supernatural crimes committed by monsters called Dopants, which are created when an ordinary human is transformed by one of the dangerous Gaia Memories.

To combat this threat, Shotaro and Philip use their own set of purified Gaia Memories and their Double Drivers to fuse into the world's first "two-in-one" Kamen Rider: Kamen Rider Double.

As the story unfolds, Shotaro and Philip slowly uncover the secrets behind the latter's forgotten past, contend with a Hot-Blooded police officer on a quest of personal vengeance, and track down the source of the Gaia Memories that are being manufactured and sold in the shadows of Futo: the enigmatic "Museum" organization, controlled by the Sonozaki Family.

Shows strong influence from 1972 Manga-turned-Toku Choujin Barom 1, Hardboiled Detective fiction, Cyberpunk, and mad cap comedy-- making the series as much a matter of fusion as its Rider.

There is now a Character Sheet and a recap page. Please put tropes specific to recurring characters on the character sheet, not this page.

Tropes used in Kamen Rider Double include:
Retrieved from "https://allthetropes.org/w/index.php?title=Kamen_Rider_Double&oldid=1826179"
Categories:
Cookies help us deliver our services. By using our services, you agree to our use of cookies.