Good Thing You Can Heal 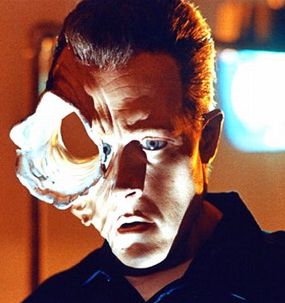 The Healing Factor is an amazing super power, capable of feats from quick healing to re-growing whole limbs or even one's entire body in seconds. Sadly, it's more passive and less visually impressive than Eye Beams or even Super Strength, both of which you can show off regularly with Mundane Utility to clue in new readers or viewers that the characters have powers.

There's only one way to show off Immortality, after all.

So for writers who don't want to go the route of "Luckily, My Powers Will Protect Me" every issue, they have to find new and inventive ways for the hero to show off their regeneration, whether by their own clumsiness, being an accident magnet, or the target of lethal attacks. Accidents usually include: deep cuts, lost limbs, third degree burns, and otherwise flirting with sure death. The problem is that while redundant exposition is avoided, the character in question gets a reputation as clumsy to the point that should they lose their regeneration they'd die or be seriously crippled, prompting onlookers to go "Good Thing You Can Heal".

Another side effect of the trope is that normally non-fatal accidents suddenly become almost certainly fatal ones just so the character has a death to avoid: If someone with regeneration so much as trips, you can expect them to end up a mangled heap of broken bones, many of them sticking out of their skin. And don't ask what happens when they get a paper cut.

This can even become Canon, as regenerating brawlers come to depend on their regeneration to the point they just use painful and suicidal tactics because they can heal from it. Can also be justified as a healing character might be the first one to leap into harms way when needed because they'll live.

It also tends to escalate into a rather gorier version of The Worf Barrage. Since the regenerator can take damage that would otherwise kill any other team member, it becomes their "job" to be the target of a "No One Could Survive That" at the hands of the Monster of the Week or recurring baddy because Immortal Life Is Cheap. It shows that the bad guy is ready and willing to kill, without actually having somebody die. At its worst, it can break Willing Suspension of Disbelief by having the regenerator come back from being completely incinerated (Shapeshifter Baggage is usually involved when that much mass is lost), or a character with clones casually killing them.

It's not even limited to characters who can heal; any character who can come back from a normally crippling injury for any reason is subject to this trope.

It's generally a safe assumption that a character who uses this trope a lot has the Required Secondary Powers of Feel No Pain or at least reduced pain. As even though they can regenerate that doesn't mean they can't feel the wound(s). And as anyone who has recovered from an injury can assert, healing doesn't exactly feel great all the time either.

A subtrope of Could Have Been Messy, with "messy" as in "fatal". They tend to coincide if the one getting mauled is bloodless (robots, golems, etc.) and has a Heart Drive or other means of near-Immortality.

Related tropes include: Pulling Themselves Together, Appendage Assimilation and Losing Your Head. Despite occasional griping, these characters tend to agree Living Forever Is Awesome. When a character deliberately injures themselves to prove their Healing Factor, it's Self-Mutilation Demonstration.

Contrast Immortal Life Is Cheap, where someone who can't die permanently gets killed repeatedly. Also contrast Sliding Scale of Undead Regeneration, which can go from this to no healing at all. The comedic version of this is They Killed Kenny, where a character who isn't established as immortal is repeatedly killed (usually for laughs), and always brought back without any reason.

Examples of Good Thing You Can Heal include:

Retrieved from "https://allthetropes.org/w/index.php?title=Good_Thing_You_Can_Heal&oldid=1861372"
Categories:
Cookies help us deliver our services. By using our services, you agree to our use of cookies.