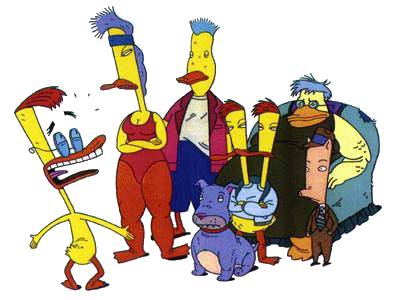 Duckman: Private Dick/Family Man is an Animated Series starring Jason Alexander as Duckman—the cheapest, sleaziest, most incompetent private investigator in the world; he's also a lousy father, a small-time crook...and a duck. He and his family are all walking, talking, tax-paying[1] ducks, and Duckman's hyper-efficient (and humorless) assistant Cornfed is a pig, despite the fact that this is not a DuckTales (1987)-type animal world. While Duckman himself walks around naked in the tradition of Daffy Duck, everyone else wears clothes.

Very crude (right down to the deliberately ugly character designs), very cynical and very, very surreal—sort of like if Luis Buñuel had made Beavis and Butthead—it freely mixed low-brow riffs with the abstract and the intellectual. The show has an ardent cult following, and a lot of its fans are still stewing over the final episode's Cliff Hanger.

Tropes used in Duckman include:
Retrieved from "https://allthetropes.org/w/index.php?title=Duckman&oldid=1903680"
Categories:
Cookies help us deliver our services. By using our services, you agree to our use of cookies.