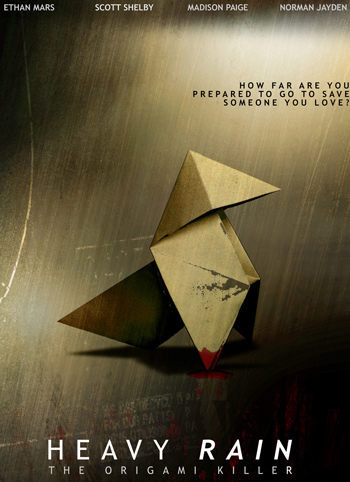 Heavy Rain is the Spiritual Successor to Quantic Dream's Fahrenheit (aka Indigo Prophecy), an Adventure Game for the sixth generation of consoles. Heavy Rain itself is a Play Station 3 exclusive, and has been described by the creators as an Interactive Movie as well as a standard adventure game.

Ethan Mars is a depressed architect whose life fell apart after the tragic loss of his child two years prior, for which he blames himself. He is jolted out of his stupor when his remaining son is suddenly kidnapped by the "Origami Killer", a notorious serial killer who uses rising rainwater to drown his young victims, then leaves origami figures on the bodies. If Ethan wishes to save his son from a similar fate, he must complete the trials set by the Origami Killer, who wishes to test just how far Ethan will go to save his child.

The story also focuses on three other characters: Madison Paige, an insomniac who becomes involved with Ethan's desperate search; Norman Jayden, an FBI profiler called in to consult on the Origami Killer case; and Scott Shelby, a private eye conducting an independent investigation.

The game focuses on choices and consequences, with actions taking place via a series of Quick Time Events a la Fahrenheit. The developers stated prior to the game's release that almost all situations would have later consequences on the plot and that they are determined to let players follow through on their actions - to the point that unless all four main characters die, the story will still continue with whoever is alive. The major themes of the game are love and the idea of what is good and what is evil (in regard to the Tagline on the poster to the right), according to the developers, who hoped to have players aim for a balance of the two rather than one extreme or another.

The game has led to very polarized reactions among the gaming community, though critical reviews thus far have been mostly positive, praising the game's intricate story and unique control scheme. Despite the developers' meager sales expectations (200,000 copies), Heavy Rain sold like hot pancakes, surpassing a whopping 2 million by 2011. One downloadable chapter, "The Taxidermist," has been released. Others were planned but were put on indefinite hold [dead link].

Similar to how Heavy Rain started off with a tech demo The Casting, Quantic Dream released a tech demo Kara on March 7, 2012, hinting at their new game. Go watch it. On E3 2012, the spiritual successor to Heavy Rain was revealed as the supernatural drama Beyond: Two Souls.

New Line Cinema and Quantic Dream Productions have obtained rights for a movie adaptation under Development Hell since 2011.

Not related to the Hard Rain campaign in Left 4 Dead 2. Be warned: MAJOR spoilers are contained below.

Tropes used in Heavy Rain include:

Jayden: 'Oh shit, Jack, ain't nothin' to it, just a little bit of self defense. Page one of the police manual: kill, or be killed.'
Jayden: 'Do you like fireworks, Jack? 'Cause I bet them tanks are gonna blow up real nice! [...] We'll just say it was an accident... or rather, I'll say it was an accident' because you won't be able to talk, will you Jack?'

Jayden: Blake, you are an unbalanced, psychopathic asshole!
Blake: I'll take that as a compliment.

Norman Jayden: Blake is trying to beat a confession out of Ethan Mars! You've got to do something!
Captain Perry: Which is more important, Norman? Finding little Shaun Mars or sparing that lowlife a few bruises? You can't make omelettes without breaking a few eggs.