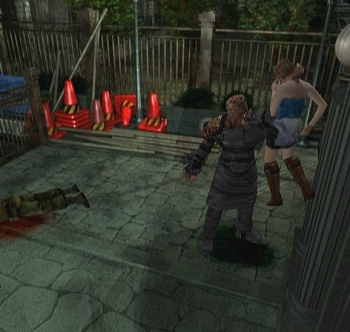 Resident Evil 3: Nemesis is the third game in Capcom's Survival Horror franchise. Chronologically, Resident Evil 3 is more of a sidestory than an true sequel. One half of the game takes place hours before Leon S. Kennedy and Claire Redfield arrive in Raccoon City, while the other half occurs roughly two days after the events of Resident Evil 2.

Jill Valentine, who survived the Mansion Incident, chose to remain in Raccoon City after resigning from S.T.A.R.S. (unlike former teammates and fellow survivors Barry Burton, Chris Redfield, and Rebecca Chambers). She consequently found herself staring at Hell's gates when Raccoon City's T-Virus outbreak began. Having experience with this sort of thing, Jill tries her best to save as many people as possible, but eventually becomes a lone survivor who decides to escape Raccoon City before becoming another victim of Umbrella's heinous actions.

Jill's mission is endangered when she discovers a new biohazard: a new type of Tyrant (codenamed "Nemesis") has been inserted into Raccoon City, and it's programmed to seek out and slay any surviving S.T.A.R.S. members. Carlos Oliveira -- who leads a band of mercenaries hired for (and set up by) the Umbrella Biohazard Countermeasure Service -- finds and helps Jill during an encounter with Nemesis, then tries to aid Jill in finding a way to defeat Nemesis and escape Raccoon City before the U.S. Government tries a last-ditch effort to contain the outbreak: a tactical nuclear strike.

Tropes used in Resident Evil 3: Nemesis include:
Retrieved from "https://allthetropes.org/w/index.php?title=Resident_Evil_3:_Nemesis&oldid=1889342"
Categories:
Cookies help us deliver our services. By using our services, you agree to our use of cookies.