Only a Flesh Wound 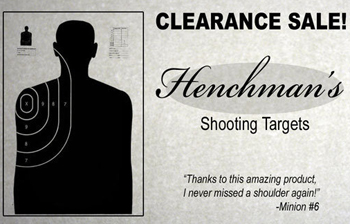 This is, of course, assuming your mooks can hit anything with their weapons at all.

On television, as well as in movies, there seems to be this general idea that if someone is shot in the shoulder, or in the leg, then the worst that happens will be that the person will grimace and go on with what he was doing before he was shot. Getting shot in the leg may cause him to hobble around a bit, but no worse than a knee sprain. A "good guy" will sometimes shoot someone in the leg or shoulder, "just to stop him," and in television and movies, this is almost always nonlethal.

However, a bullet wound to the left shoulder will usually prove to be lethal while a character will survive the same wound to the right shoulder or even the right chest, presumably because the heart (allegedly) is on the left side.

In reality, there's no "safe" place to shoot a person, not even in a seemingly non-vital extremity like a leg or arm. There are huge blood vessels in a human being's shoulder as well as lots of very delicate nerves and a very complex ball-and-socket joint that no surgeon on Earth can put back together once it's smashed by a bullet. There are huge blood vessels in a human being's legs too, a shot that nicks the femoral artery will cause a fatal loss of blood in only a few minutes. And this is all assuming a "clean" through-and-through wound, disregarding the possibility of the bullet glancing off a bone or joint and deflecting or fragmenting into pieces which then can hit something else inside. In short, there's no way for anyone, good or bad, to shoot someone and know that they will survive the wound. As they say, if you're shooting at all, you're shooting to kill.

This trope is so widespread that it's caused people to assume that it's an accurate reflection of reality. In truth, since there isn't any safe place to shoot at, police and soldiers usually aim for the center of mass (ie the torso) simply to increase the odds of hitting the person in the first place. Trying to intentionally wing a target increases the odds that you'll miss entirely or end up hitting someone else. When dealing with dangerous criminals and where innocent lives are on the line, presumably, hitting the target, and only the target, should be top priority.

Insofar as this trope has any truth to it at all, it comes from the fact that the largest muscle pads on the human body—about the only type of tissue which can take a wound of impressive visual nastiness that isn't necessarily incapacitating or life-threatening—are in the thighs and the outside (not the center) of the shoulder. (The gluteus maximi also suffice, but that particular target zone is often felt to lack dramatic gravitas, though getting Shot in the Ass is many times Played for Laughs.) The shoulder or thigh are also among the safer places to conceal bloodbag squibs on an actor's body. This trope may possibly be justified by the character being Made of Iron.

When the character insists on this, regardless of evidence to the contrary, he is saying I Can Still Fight. (Which he does not, in fact, have to survive.)

Video Games are usually an exception/subversion. Draining a game target's HP is quasi-realistically enough to kill/destroy it even if all damage was to the legs or arms. In games with dismemberment, taking off a limb may lead to instant death. Very few video games actually feature bleeding though, but those that do tend to be Overdrawn At the Blood Bank.

Do note that many of the examples below, especially ones from more recent media, are subversions or outright aversions.

Examples of Only a Flesh Wound include: