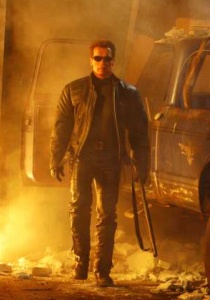 He'll be back, every time.

This is the threat that implacably, unrelentingly comes after you. This guy will hunt you down no matter what you do or where you go, even after you try relatively ordinary measures. Bullets may hurt him, but they'll never kill him. Swords may pierce him, but he's likely to pull it out and stab you with it. Even a rocket launcher will probably just slow him down. Even if you do manage to escape, don't relax, he'll always find you. Lock the doors if you want, he'll just use Super Strength to pull you through the wall.

Unlike The Determinator, an Implacable Man is more likely powered by science or magic than willpower. It is going to take some serious Applied Phlebotinum to defeat them. The highly sought-after MacGuffin might do the trick... maybe. There Is No Kill Like Overkill. If this guy's the Big Bad, you probably won't be able to either way; the most you can hope for is to fend him off until he resurfaces again. And he will resurface; it's just a question of time.

Of course, comical Implacable Men are still just as prone to mundangers as anyone else. As a result, it makes for a powerful moment when they're shown to be Not So Invincible After All.

This isn't exclusively a villain trope either. Get a hero mad enough or if they want to get you bad enough, they're just as likely to invoke this as Determinator. They will typically go into Tranquil Fury, and these occasions are normally depicted via Mook Horror Show. The Slow Walk is a similar phenomenon.

See also Hero-Killer, The Man They Couldn't Hang, Immortal Assassin, Perpetual Motion Monster, and Perfect Play AI. Usually a certifiable Badass. Lends himself well to being the Goliath in a David Versus Goliath situation, if a villain, or an inducer of Mook Horror Show and Villainous Valour if an (anti)hero.

Examples of Implacable Man include:

Whether he's aiming for you or not, it generally seems like a good idea to flee from a man whose very existence tends to incite bloody battles to the death that often rage across multiple streets in a frenzy of blades and blood. You might not be his target, but you should probably get the hell out of his path.

Retrieved from "https://allthetropes.org/w/index.php?title=Implacable_Man&oldid=1890982"
Categories:
Cookies help us deliver our services. By using our services, you agree to our use of cookies.