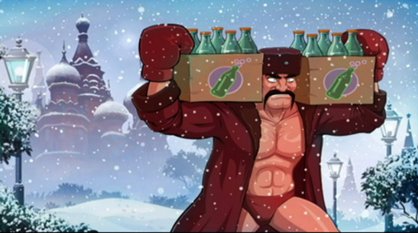 Soda will make you strong!

"I really don't know from where you guys get the nerve."


"From a long, hard winter, Mr. President."
—President Bartlet and the Russian Ambassador, The West Wing

"The physical and mental attributes of the Russian soldier are such as to make them the best people of all for war. They are long-enduring, tough, and insensitive and they find it easy to withstand the hardships of campaigning. They devour great quanities of raw and uncooked food, and their physical constitution is so hard that they bathe in rivers in the coldest weather."
—Quoted from a contemporary source in The Military Experience in the Age of Reason by Christopher Duffy

Most Russian characters in media, at least since the Cold War started, are depicted as hard fightin', heavy-drinkin', manly, boorish creatures. Even their females border on being The Baroness or the Femme Fatale. So what's a troper to do? Even those times when you do see a soft, sophisticated Russian, they're evil. So much, in fact, that a non-evil, cultured Russian character is a rarity. And before the Cold War it was a Wild Communist, and even before, in XIX century, it was a hard-fighting, heavy drinkin', boorish guy in furs, with a wild beard and a pet bear. So this trope predates the television by some 150 years (it goes all the way back to 1813, in fact). And it would be probably even older if people outside the country itself before 1813 had registered Russia's existence.

One wonders for the reason for this trope - is it the cold winters of Russia, or them being raised on unsophisticated-but-a-lot-food, or something completely different? But that's rarely if ever answered.

Often overlaps with, if not providing an outright Justification for, Husky Russkie.

Examples of Mother Russia Makes You Strong include: