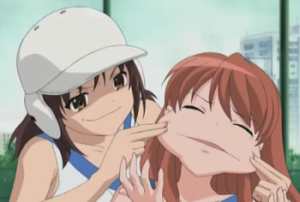 Haruhi shows how it's done.

A common form of punishment in animated shows that involves stretching a character's face on either side. Generally done to imitate a smile (usually to the Comically Serious member of the cast for maximum humiliation) done out of frustration by one character towards another, or as a form of restraint. Optional "Gwwwommm" sound effect, and while not always done to the Rubber Man, the general idea is the same. In the Western comics the Unsound Effect tend to be "Nyak!" or similar.

Examples of Rubber Face include:

Retrieved from "https://allthetropes.org/w/index.php?title=Rubber_Face&oldid=1871393"
Categories:
Cookies help us deliver our services. By using our services, you agree to our use of cookies.