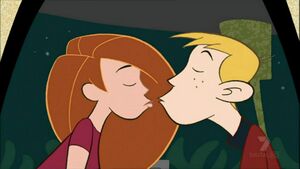 It just may be the cruelest, most frustrating thing a writer could ever pull. Two characters are finally about to bring all their shippers' dreams to fruition. They're about to resolve all the Unresolved Sexual Tension and cross the Just Friends line, at last. They're staring mesmerized into each others' eyes, inching forward ever so slowly, less than a millimeter away from lip-to-lip contact. This is it, the fans scream in their minds. They're finally going to kiss! And then...

Were they interrupted by a knock on the door or falling meteor? Did one of them remember the dead Temporary Love Interest they promised never to forget? Was the thought of a Relationship Upgrade suddenly just too scary? Well, for some reason, no doubt connected to Status Quo Is God, they can't or won't go through with it. They may be giggling afterwards, or they may be crying a river.

The sad thing is, the Almost Kiss says as much as a kiss, anyway, since we can see they both want it. But this way, the tension and dreams of shippers remain for the writers to continue to take advantage of.

Sometimes referred to as a "near-miss kiss."

Study the Moment Killer for a larger concept.

In shows aimed at a younger audience where a kiss is a big deal, there is usually a big relationship-sealing kiss saved for the finale, preceded by several "almost" moments during the earlier episodes.

No real life examples, please; if anyone tries to add a Real Life example of this Trope, we're gonna start crying.

Examples of Almost Kiss include:

Retrieved from "https://allthetropes.org/w/index.php?title=Almost_Kiss&oldid=1871150"
Categories:
Cookies help us deliver our services. By using our services, you agree to our use of cookies.