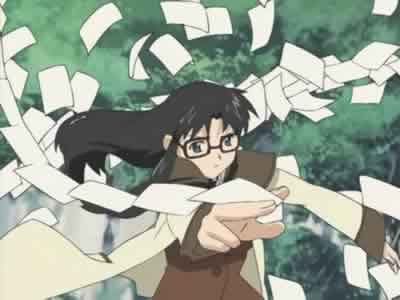 "Please give me back my book!"

Read or Die is a three-episode OVA about the adventures of Yomiko Readman -- eccentric (and very cute) bibliomaniac, part-time substitute teacher, and super-powered agent for the British Library's secret intelligence division. Codenamed "The Paper", Yomiko possesses what can only be called elemental paper powers. With her talent, she can do almost anything with paper—including stopping bullets with notecards and dueling a lightsaber-wielding opponent with a sword made of $100 bills. She also has an insatiable addiction to reading, spending thousands of dollars a week on books. Yomiko is an odd combination of giggling innocent schoolgirl-ish woman (one gets the distinct impression most of the time that her mental age and, ahem, general level of life experience, are those of a twelve-year-old) and stone-cold killer.

Set in an alternate late 20th-century Earth with rare and mostly hidden superhumans, Read or Die tells of Yomiko's efforts along with a pair of compatriots to oppose a mysterious group of supervillains calling themselves "I-jin" ("Geniuses"). Strangely resembling notable figures from history, the I-jin want (among other things) a book once owned by Beethoven that Yomiko has recently purchased, within which lies the key to an evil plan with world-wide consequences. The result is a globe-trotting rollercoaster ride of action, friendship, betrayal, wild plot twists and a small leavening of sly humor. Do not miss the highlight of the first episode, an aerial dogfight over the Manhattan skyline between a steam-powered glider and a giant paper airplane, punctuated by Yomiko's plaintive cries of "Please give me back my book!" There are other things not to miss, as well, but even mentioning them would be a spoiler!

Originally a book series and then a manga. The OVA follows some of the characterization introduced in the first manga chapters, but then drastically becomes an Alternate Continuity.

Made in 2000, the first episode clearly shows the World Trade Center in New York, with one scene actually set on the roof of one of the towers; those who are excessively sensitive about the events of 9/11 may want to avoid it for that reason. Other than that, this is a must-have show. Strangely for a Japanese production, its superheroes are far more Western in concept than sentai, but the writers and producers are clearly comfortable with the idiom and make it work very well.

Read or Die was incredibly popular and was quickly followed by a 26-episode TV series simply entitled R.O.D the TV or simply ROD TV (or "R.O.D. the TV Series" as it is called in the West), which itself has been wildly popular. Please note that R.O.D the TV has a separate page; this page is for the OVA.

A new manga series has been declared, "R.O.D. Rehabilitation" set in a Darker and Edgier Alternate Universe about a different Yomiko who lives in a world where the printed word has been declared obsolete, and she is one of the few bibliophiles creating a rebel city-state.

There is a community project to translate the original novels here.

Do Not Confuse With Mate or Die.

Read or Die is the Trope Namer for:
Tropes used in Read or Die include:
Retrieved from "https://allthetropes.org/w/index.php?title=Read_or_Die&oldid=1959519"
Categories:
Cookies help us deliver our services. By using our services, you agree to our use of cookies.