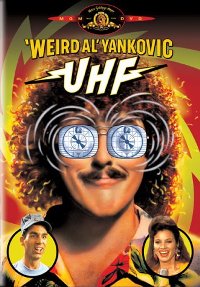 We got it all on UHF!

UHF is a 1989 movie starring "Weird Al" Yankovic, written by Al and his manager Jay Levey (who directed). Al plays George Newman, a young man with an all-too-fertile imagination adrift in life. After getting fired from yet another job due to excessive daydreaming, he is appointed by his uncle Harvey as manager of Channel U62, a local UHF television station that Harvey won in a Poker game.

George and his friend Bob soon discover that U62 is a near-abandoned station with a staff of three, almost no reception to speak of, and nothing but stale reruns for programming. With optimistic enthusiasm, George tries to revitalize the station's schedule, but quickly realizes that the channel will soon go bankrupt; the local airwaves are dominated by Channel 8, a network affiliate VHF station whose owners are card carrying villains with good publicity.

Things change when a depressed George carelessly puts station janitor Stanley Spadowski in charge of the channel's early-morning kids' show; to everyone's surprise, Stanley's Cloudcuckoolander antics become an instant hit across all demographics. Emboldened, George unleashes the full force of his creativity with a line of unique, oddball shows to fill out the rest of the schedule, with Stanley as their flagship superstar. These moves quickly catapult U62's ratings to #1 in town—which prompts Channel 8 head honcho R.J. Fletcher to take them down by any means necessary...

Like Weird Al's music, the film focuses its comedy on oddball humor and satire, parody, and pastiche of pop culture. Released in 1989, at the height of Weird Al's popularity, the film was expected to be a summer blockbuster, but barely broke even at the box office (opening against the 1989 Batman movie, after all) and instead became a Cult Classic.

Then again, maybe a feature making fun of independent local TV does fit best on the small screen?

Tropes used in UHF (film) include:
Retrieved from "https://allthetropes.org/w/index.php?title=UHF_(film)&oldid=1770892"
Categories:
Cookies help us deliver our services. By using our services, you agree to our use of cookies.