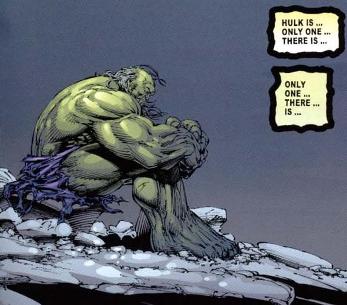 Maybe The End of the World as We Know It came and went. Perhaps they are the only survivor of an interplanetary expedition or a Robinson Crusoe on Earth. Or worst of all, they are trapped tantalizingly close to other humans, yet unable to escape the Tailor-Made Prison that keeps them trapped. However, the effect is the same; this guy or gal is now completely, utterly alone and it is slowly... driving them... mad.

On the plus side, they'll usually have a trusty animal companion that helps keep them sane in the absence of true human companionship (generally it's debatable just how sane they are)... that is, until it dies. Usually they will be rescued by movie's end, but before that expect them to run into another survivor and creep them out quite a bit before settling down. However, if they aren't the lead expect them to actually go insane long before being found.

This is also the ultimate Ironic Hell for any Misanthrope Supreme Big Bad.

Related to I Just Want to Have Friends, Last of His Kind, Alone in a Crowd, Living Relic, and Slept Through the Apocalypse. Compare The Hermit. Not to be confused with The Atoner.

Examples of The Aloner include:

Retrieved from "https://allthetropes.org/w/index.php?title=The_Aloner&oldid=1769098"
Categories:
Cookies help us deliver our services. By using our services, you agree to our use of cookies.