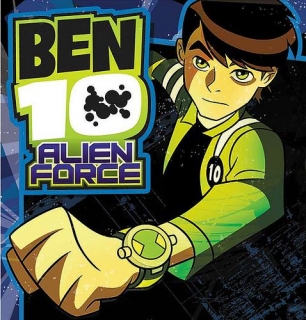 The sequel series to Ben 10, with management taken over from Man of Action by Glen Murakami and Dwayne McDuffie of Justice League fame. Ben "10" Tennyson and his cousin Gwen, now both 15 years old, team up with a reformed Kevin Levin, who is now 16, to stop various evil aliens. Seasons 1 and 2, which were initially one entire season, has them going off against the Nazi-esque Highbreed, who are determined to eliminate all other races, leaving the "one true race". Compared to the original series, those seasons had a darker and more mature approach, as well as less filler and more continuity between the episodes.

Season 3 doesn't really have an Arc Plot, but instead tried to meld in bits of the original series, such as introducing villains of the previous serie, putting more filler and toning down the dark tone. The closest thing to an Arc Plot for this season is Vilgax's attempts to finally get his revenge on Ben.

As with the first series, Alien Force was given a Live Action Adaptation film Ben 10 Alien Swarm. General census is that its leagues better then the original's Race Against Time.

Tropes used in Ben 10: Alien Force include:
Retrieved from "https://allthetropes.org/w/index.php?title=Ben_10:_Alien_Force&oldid=1911756"
Categories:
Cookies help us deliver our services. By using our services, you agree to our use of cookies.