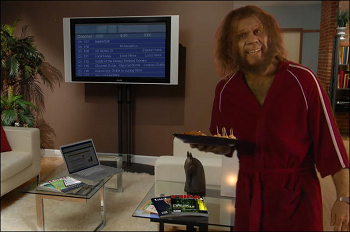 Fish Out of Temporal Water? He's made it into delightful hors d'oeuvres.

Cities, countries, even civilizations rise and fall through the ocean of time, becoming myths in the millennia that follow. All their triumphs and failures becoming little more than gravel and sand beneath our feet. There is one bright spot to this though, in the form of a surviving Living Relic. Somehow, a human, computer AI, robot, or immortal homunculus has managed to survive the destruction of their home and lived to tell the tale.

Though their existence can be due to a fluke of fate, they may represent an attempt to Fling a Light Into the Future as a warning, guide, or defiant marker of their existence. All well and good, except the Living Relic is probably feeling like a Fish Out of Temporal Water at the least, and has likely been suffering a case of Survivor's Guilt. Which can get gruesome if they've been alone, awake and immortal the whole time. Quite a few Living Relics are insane because of this and become an Outside Context Villain, though a few may become sane from the boredom.

Their role in a story is likely that of giving exposition to heroes who are anywhere between months to thousands of years Late to the Party. After they finish expositing, they might ask to be killed. Or join the adventuring party. Really, it's a toss up.

Rarely, the living relic has managed to join and live among normal human civilization (or an alien equivalent) and tries to live on, sometimes successfully hiding their origins. Despite the emphasis on immortal survivors of ancient civilizations, the Living Relic isn't always ancient or immortal. A derelict in space might have the Robot Buddy shut down and get started up again by the heroes thousands of years later, or a Human Popsicle can be woken up from a sleep inducing spindle. Sometimes, they might just be the last descendant of a group of survivors.

Examples of Living Relic include: