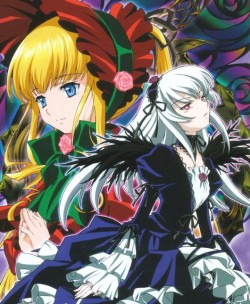 Sakurada Jun is a boy with a trauma in his past and a strange hobby: He collects supposedly cursed items in the hope that one of them will actually turn out to be cursed. One day, he receives a letter which simply says, "Will you wind? Yes / No". Responding in the affirmative, he sticks the letter in his desk drawer and thinks nothing more of it until an ornate case arrives with a beautiful clockwork doll inside. True to his word, Jun does wind, which causes the doll to become animated.

Shinku, the doll, immediately sets about correcting Jun's mannerisms, trying to convert him into her servant by default -- an attempt cut short by the appearance of a stuffed clown with a pair of menacing-looking knives. Jun, fearing for his life, agrees to become Shinku's medium (her supply of power so that she can fight), and is drawn from there into the strange world of the Rozen Maiden dolls and the Alice game.

The series continued into an anime-origina, second season, called Rozen Maiden: Träumend. Season one's Big Bad, Suigintou, is supplanted by a new doll named Barasuishou, and it seems as if the mysterious Rozen, father of the Rozen Maiden, has finally appeared. The OVA, Rozen Maiden Ouverture, focuses on Suigintou's Backstory, and shows that Shinku wasn't as good a sister as she'd like to think.

Sadly, it was never finished because of a dispute between the producers and publishers of the manga. The anime Overtook the Manga and went to its own conclusion while the manga went on hiatus for months until it was finally Cut Short with a Deus Ex Machina (and an apology for doing so).

A new manga series is currently being published under the name Rozen Maiden Tale. It's a For Want of a Nail story starring a much older Jun Sakurada, which follows what would have happened if Jun had responded "do not wind" to the initial letter, and crosses over with the original universe. After a few chapters, the story then shifts back to the original Jun via a bridge-arc and the plot resumes where the original Manga ended, making Tales, despite what it initially looked like, an actual continuation instead of an Alternate Universe spin-off.

Studio DEEN adapted the new manga into a new anime with noticeably worse production values than its predecessors and callet it Rozen Maiden: Zurückspulen. It failed.

Zurückspulen continues from a backstory similar but not identical to the first Rozen Maiden anime and after alienating and/or confusing most of the audience with a very rushed Recap Episode as the first episode, concentrates on the older, alternate-universe Jun. As Träumend never happened, the villainous seventh doll is not Barasuishou but a new doll called Kirakishou. The parts of the plot that have to do with the Rozen Maiden dolls and alternate universes are hard to follow and feel very random even to viewers familiar with the earlier animes and are likely more or less incomprehensible to people new to the franchise.

Tropes used in Rozen Maiden include:

Retrieved from "https://allthetropes.org/w/index.php?title=Rozen_Maiden&oldid=1800740"
Categories:
Cookies help us deliver our services. By using our services, you agree to our use of cookies.