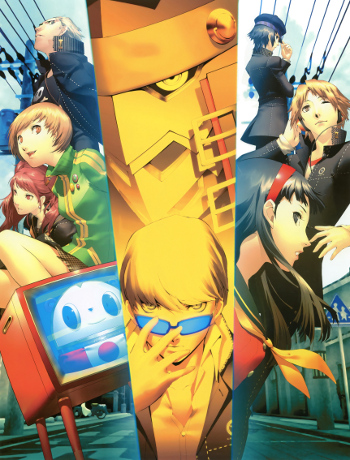 Persona 4 is an Urban Fantasy Role-Playing Game in the popular JRPG franchise Shin Megami Tensei, made by Atlus.

The Hero is an Ordinary High School Student (script name is not given, but he's called Souji Seta in the manga and Yu Narukami in the anime and fighting game), who will be living in the rural town of Inaba for a year with his uncle Ryotaro Dojima and his cousin Nanako. Not too long after he arrives, impossible murders begin to occur: people suddenly disappear, only for their bodies to be found hanging on telephone poles. Following an urban legend about a television channel that will show your soulmate at midnight on rainy days, the cast discover a mysterious otherworld on the other side of the television screen enveloped in a perpetual, oppressive fog.

Someone or something is kidnapping innocent people and throwing them into this otherworld, where the Shadows that inhabit it will eventually kill them. Using the power of Persona, The Hero and his friends resolve to enter the television world and rescue the kidnapped victims before the fog sets in and they die.

Persona 4 takes place in the same universe as all the other Persona games (according to Word of God anyways), and begins almost exactly a year after the events of The Answer in Persona 3:FES. The game runs off the Persona 3 engine and even on the same console, but with some upgrades to the graphics and different game mechanics. Most of the Persona 3's main features return, including the popular Social Links and the calendar day system - just as in Persona 3, the game takes place within an entire school year.

One major difference is that instead of the player climbing one long tower for much of the game's combat, the player instead enters the TV World and has access to multiple dungeons that unlock as the story progresses. Plotwise, the setting is rural versus the urban setting of Persona 3, which creates an entirely different feeling and plays against the game's main themes. Notably, some of the sexual overtones present in earlier Persona titles have returned in this one.

Persona 4 is considered by many to be one of the best JRPGs in recent memory, has won universal acclaim and many awards, and deftly followed up on the spur of interest caused by Persona 3 and cemented the Shin Megami Tensei franchise's place in the Western gaming mainstream at last. It has also been called the Playstation 2's last great game, a very bold claim, but this excellent game is definitely a candidate for that.

Also, unlike other Shin Megami Tensei games, it is so happy that its dominant color motif is bright yellow. Seriously, even comparing it to its immediate predecessor, Persona 4 is quite possibly the most upbeat and positive game about murder ever made.

Giant Bomb's Let's Play now has its own page, check it out here.

The game has an anime adaptation, titled Persona 4: The Animation. Tropes belonging exclusively to the anime should be posted there.

A Playstation Vita remake, titled Persona 4: The Golden has been announced and is to be released on June 14th in Japan, with the US release date set ambiguously for Fall 2012. The remake features a new character named Mary, who, unlike Persona 3 Portable's new female character, is confirmed to NOT be a Gender Flip AU of the hero. In addition, there are alternate costumes for characters, new enemies and areas to explore, updated Ultimate Personas for the cast, a new gameplay mechanic involving motorbikes both in the real world and in the Midnight Channel, combination attacks between characters, and new events that take place during the time skipped in the original[1], such as a skiing trip in January. And on top of all of that, a completely redone opening animation by Studio Madhouse.

Atlus is also working with Arc System Works to develop Persona 4 Arena, a BlazBlue-style fighting game set two months after the conclusion of the first game.

The late 2011 fanfare didn't stop there. Atlus revealed more two projects for the series: one is a Light Novel starring Naoto Shirogane as the protagonist called Persona X Detective: Naoto. The story of the novel [dead link] takes place 1 year after the events of the game when Naoto is a senior in high school. However, it will not take place in Inaba, but in a different town and a different school altogether. The other is a Spin-Off manga starring Yosuke, entitled Persona 4: The Magician running independently on Persona Magazine. In December, one more project was announced: a Japanese-only Persona 4 live stage production titled VisuaLive: Persona 4, which ran from March 15 through March 20 of 2012.

And if all of that wasn't enough to quench your thirsts, Persona 4: The Animation is now getting a Big Damn Movie; summarizing the events of the series while adding new scenes along with the true ending.

Persona 4 and its spinoffs provides examples of:
Retrieved from "https://allthetropes.org/w/index.php?title=Persona_4&oldid=1942942"
Categories:
Cookies help us deliver our services. By using our services, you agree to our use of cookies.