Everything About Fiction You Never Wanted to Know.
(Redirected from A Fish Tale)
Jump to navigation Jump to search 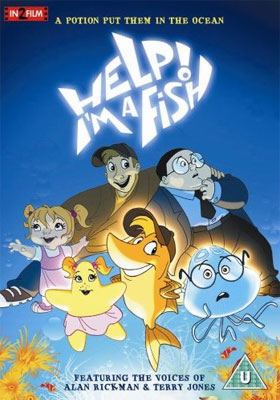 What if you were turned into a fish?

This is the plight of Fly, his sister Stella, and their cousin Chuck, after stumbling across Professor MacKrill's labratory, where Stella mistakes a bottle of Fish Potion for a drink, and (unknown to the others) is transformed into a starfish. In the ensuing confusion, she accidentally gets thrown out of a window into the sea by Fly, and only upon consulting a video tape do the other three find out what happened to her. Whilst searching the sea for Stella though, a storm brews up, and in a moment of hot-headedness Fly drinks the potion, turning into a fish himself. A few moments later the boat capsizes, and to save himself from drowning Chuck drinks the potion himself, whilst the MacKrill seemingly drowns. Although things seem hopeless, the professor did make an antidote, but as luck would have it, it was tossed into the ocean when the boat capsized, and is now in the hands of Joe - a megalomaniac pilot fish, who has plans to rule the fish.

Oh, and did we mention that if Fly, Chuck, and Stella don't get the antidote in 48 hours, they'll be stuck as fish forever?

Although a Danish production made by the studios 'A. Film A/S', it was originally released produced and recorded in English in an attempt to increase revenue, it was later released in Danish under the title "Hjælp, jeg er en fisk". Despite the English original cast it wasn't until 2006 that it came to U.S. shores, under the title A Fish Tale. Not to mention it had really sucky cover art.

Tropes used in Help! I'm a Fish include:
Retrieved from "https://allthetropes.org/w/index.php?title=Help!_I%27m_a_Fish&oldid=1767904"
Categories: