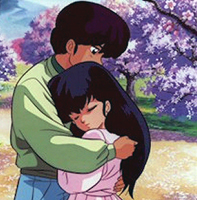 Yusaku Godai is a lovable, somewhat serious, but hopelessly inept ronin who is trying to study to pass college entrance exams while living at Maison Ikkoku, a somewhat run-down boarding house. His own disorganized, gormless lifestyle does not make this an easy task. Neither do the antics of his neighbors, including a party girl, an older mom fond of the bottle, and a surreal mooch, all of whom use his room for their frequent booze-ups. The manager has not been seen in some time. Godai finally has enough and is walking out the door, bags in hand....

... and in walks Kyoko Otonashi, a beautiful, sweet-tempered woman who announces herself as the new manager.

In order, Godai's suitcase, jaw, and heart hit the floor, and from then on, it's a roller coaster ride of strangeness, complications, botched courting, miscommunicated feelings, and every so often, achingly sweet, poignant moments.

Maison Ikkoku (pronounced "Mezon Ikkoku," for those of you used to thinking in Japanese phonemes) is a lengthy series, clocking in at 96 episodes. It is very true to life, at least the life of the time period in which it was set, and rarely departs heavily from real life scenarios, without the Love Dodecahedron, supernatural hijinks, convoluted logic or any of the trappings of Rumiko Takahashi's other series.

It has inspired many similar series, among them Love Hina and Mahoraba.

Tropes used in Maison Ikkoku include:

Shun: Nothing would make me happier than to die at your hands.