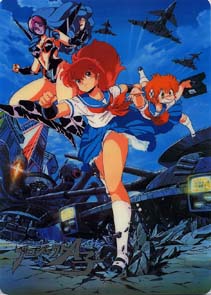 In Graviton City, Japan, sometime in the future, Eiko ("A-Ko") Magami -- a sailor-suited teenage girl endowed with absurdly high levels of superhuman strength and speed -- attends high school with her best friend, the blonde and bubbly Shiiko ("C-Ko") Kotobuki (who is both The Ditz and a Lethal Chef). Unfortunately, their incredibly intelligent (and gorgeous) Gadgeteer Genius classmate Biiko ("B-Ko") Daitokuji apparently has a lesbian crush on really, really wants a Romantic Two-Girl Friendship with the blonde dimwit. She is determined to win C-Ko for her own, and attacks A-Ko at every opportunity with Humongous Mecha or her revealing battlesuit. Things get just a bit more complicated when an alien warship descends upon Graviton City with the goal of capturing one of the girls -- or rather, rescuing her, as she seems to be their long-lost princess...

A blend of over-the-top screwball comedy, action, and science fiction, Project A-Ko was one of the shows everyone saw during the prehistory of anime in America, especially because it was one of the first "non-arty" anime imported commercially back in The Eighties. The show's general level of goofiness can be seen in the girls' names -- quite simply, the three main characters are named "Girl A", "Girl B" and "Girl C". (There's even another character who simply goes by "D".) Despite over two decades passed since its release, A-Ko remains a persistently influential, respected, and well-loved film. As an example, in 2003 a group of independent filmmakers in the United States released Xtracurricular, a live-action film which the filmmakers admitted was directly inspired by Project A-Ko (for example: the three main characters' names start with A, B, and C).

The original film was followed by three OVAs which continue the story of the film -- Plot of the Daitokuji Financial Group, Cinderella Rhapsody, and Final -- and a two-part Alternate Continuity OVA called A-Ko the VS.

Tropes used in Project A-ko include:
Retrieved from "https://allthetropes.org/w/index.php?title=Project_A-ko&oldid=1917779"
Categories:
Cookies help us deliver our services. By using our services, you agree to our use of cookies.