We Can Rule Together 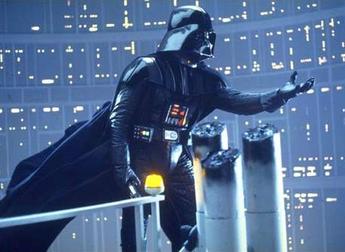 A father and son ruling an empire of pure evil together doesn't resolve as many of their psychological issues as one might think.

Say you're a villain and your Evil Plan is being ruined by this pesky hero who just will not let you scheme in peace. You've sent Mooks, you've berated your underlings for their failure, maybe you've even tried shooting him/her. No dice, the hero keeps coming. You can't beat them!

Well, if you can't beat them, don't join them—offer to let them join you. That's right: you can become the partner in crime/trusted advisor/ruler of Australia if you will just drop this silly crusade against the Evil Overlord and get with the program. Go on, those oppressed peasants you're fighting for won't mind—they'll understand that you can't let an opportunity like this slide. The offer is usually made by someone who needs to Pick on Someone Your Own Size with a Circling Monologue.

When this offer is made, it's usually a sign that either the hero or the villain is going to die very soon. If not, it's the hero's final rejection of the villain's vision, and marks the point where things get serious...

Because the hero rarely follows up on the offer. From the human perspective, it's a pretty foolish move anyway. How could any villain ever be serious about hiring someone who's been thwarting their evil schemes every step of the way, especially when it's a morally righteous Cape? How could the villain possibly trust someone treacherous enough to do such a blatant Face Heel Turn?

This can be particularly chilling when the offer comes from a Well-Intentioned Extremist rather than an outright baddie - because they believe that they are offering you a chance to do the right thing, and will be surprised (or in the case of a Knight Templar, outraged) that you would turn them down.

The villain's momentary admiration for the hero usually (intentionally) leaves lasting Not So Different scars.

Some Videogames may give this option to the player, leading to an alternate ending or a Nonstandard Game Over, in most cases an "evil" player's scripted response to this offer is commonly the player killing the villain and taking the Cosmic Keystone for themselves. Certain villains should be aware that even success can be dangerous to them if the Fallen Hero doesn't feel like sharing.

Compare Last Chance to Quit, Deal with the Devil. The inversion is Last Second Chance, when it's the hero making the offer. Super Trope to I Can Rule Alone. See also Leave Your Quest Test. If villain insists too much for the hero to join then expect Foe Yay to occur. Contrast You Could Have Used Your Powers for Good, which is when the hero tries to bring the villain over to the good side, and Offered the Crown, where the hero is offered power by the good guys as a reward for heroism.

Examples of We Can Rule Together include:

Retrieved from "https://allthetropes.org/w/index.php?title=We_Can_Rule_Together&oldid=1890394"
Categories:
Cookies help us deliver our services. By using our services, you agree to our use of cookies.