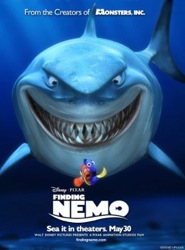 The shark is actually a decent guy, as long as he doesn't smell blood.

Finding Nemo is a 2003 computer-animated film from Pixar, and the first one from the company to win the Oscar for Best Animated Feature.

The movie takes place in and around the Great Barrier Reef near |Australia, and centers on a neurotic clownfish named Marlin. After losing his mate and all but one of their 400+ eggs, Marlin becomes overprotective of his remaining son, Nemo. On his first day of school, Nemo gets fed up with Marlin's fear of the ocean, and ends up disobeying his father's orders by going near a boat. Soon after, Nemo gets "rescued" by a scuba diver, and Marlin, going against all his fears, goes off to find him. Marlin joins up with a forgetful blue tang named Dory, and they brave all sorts of obstacles to, well, find Nemo.

Meanwhile, the scuba diver turns out to be a Sydney dentist who puts Nemo in his office's aquarium, and plans to give the fish to his niece, Darla, for her upcoming birthday. The other fish in the tank, most of whom are somewhat insane, decide to help Nemo escape (especially because Darla is described as a "fish killer", who, whenever she gets a fish, shakes their plastic bag too hard).

This movie is notable for being Pixar's most commercially successful feature until Toy Story 3. It didn't exactly hurt the tourism trade in Australia, either.

Has no relation whatsoever to Little Nemo.

Tropes used in Finding Nemo include:
Retrieved from "https://allthetropes.org/w/index.php?title=Finding_Nemo&oldid=1829620"
Categories:
Cookies help us deliver our services. By using our services, you agree to our use of cookies.